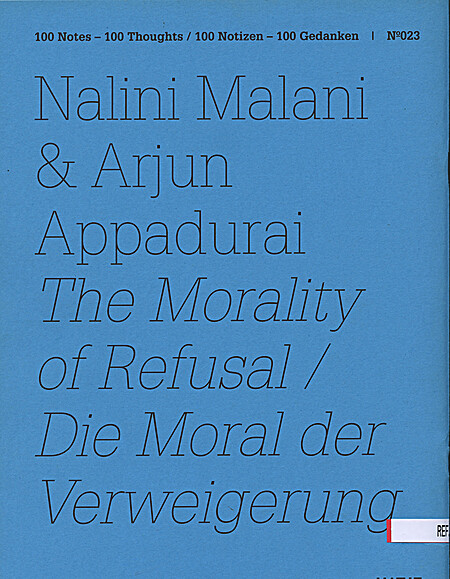 No 023 Nalini Malani & Arjun Appadurai: The Morality of Refusal

In his essay, Arjun Appadurai reflects on the significance of Gandhi's ideas on non-violence as a form of political action in India, pursuing the thesis that Gandhi's thought and practices exhibit a double genealogy. While one genealogy is related to Indian notions of asceticism, avoidance, and abstinence, the second is influenced by kingship, sacrifice, and martial prowess and has no regard for the injury of living beings. According to Indian traditions of warrior asceticism, both genealogies intermingle, which constitutes a vital resource for a politics of militant religiousness in India today. Nalini Malani responds to this essay with drawings that sometimes overlay the text, sometimes accompany it, sensually reflecting Appadurai's elaborations.Nalini Malani (*1946) is an artist living in Bombay.Arjun Appadurai (*1949) is an anthropologist and Goddard Professor for Media, Culture and Communication at New York University.… (more)