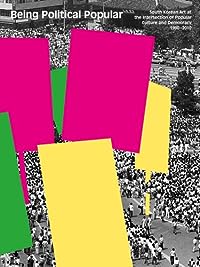 Being Political Popular: South Korean Art at the Intersection of Popular Culture and Democracy, 1980-2010

Many artworks from recent South Korean history are located in the nebulous but fertile contact zone between public/popular culture and democracy movements. Being Political Popular attempts a thematically focused and historically interventionist inquiry into the current status of South Korean contemporary art, exploring the work of 17 artists and art collectives. Being Political Popular documents the complex lines of thinking that scholars such as Chang-nam Kim, Namhee Lee, and Wan-kyung Sung have nurtured on the topics of the popular music and resistant youth culture of the 1970s, the politics of minjung subjectivity during the 1980s democracy movement, and the 1980s minjung art movement. The book also includes artists' writings and manifestos by Mnouk Lim, mixrice, Hein-kuhn Oh, and Sangdom Kim--primary materials that provide the reader with a closer look at their art-making. It serves as a reader's gateway to the recent history of South Korean visual arts and public culture, marking the beginning of a more nuanced and multifaceted investigation of the South Korean aesthetics of politcs.… (more)