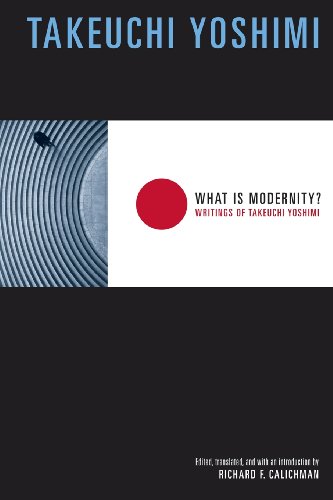 What Is Modernity?: Writings of Takeuchi Yoshimi (Weatherhead Books on Asia)

Regarded as one of the foremost thinkers in postwar Japan, Takeuchi Yoshimi (1910-1977) questioned traditional Japanese thought and radically reconfigured an understanding of the subject's relationship to the world. His works were also central in drawing Japanese attention to the problems inherent in western colonialism and to the cultural importance of Asia, especially China. Takeuchi's writings synthesized philosophy, literature, and history, focusing not simply on Japan and the West but rather on the triangular relationship between Japan, the West, and China. This book, which represents the first appearance of Takeuchi's essays in English translation, explores Japanese modernity, literature, and nationalism as well as Chinese intellectual history. Takeuchi's research demonstrates how Asians attempted to make sense of European modernity without sacrificing their own cultural histories. An authentic method of modernity for Asia, Takeuchi concludes, needs to stress difference and plurality as opposed to the homogenizing force of westernization.… (more)