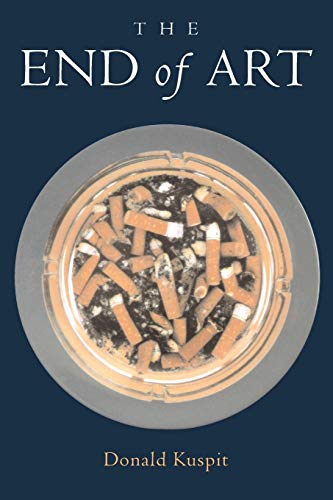 The End of Art

In The End of Art, Donald Kuspit argues that art is over because it has lost its aesthetic import. Art has been replaced by 'postart', a term invented by Alan Kaprow, as a new visual category that elevates the banal over the enigmatic, the scatological over the sacred, cleverness over creativity. Tracing the demise of aesthetic experience to the works and theory of Marcel Duchamp and Barnett Newman, Kuspit argues that devaluation is inseparable from the entropic character of modern art, and that anti-aesthetic postmodern art is its final state. In contrast to modern art, which expressed the universal human unconscious, postmodern art degenerates into an expression of narrow ideological interests. In reaction to the emptiness and stagnancy of postart, Kuspit signals the aesthetic and human future that lies with the New Old Masters. The End of Art points the way to the future for the visual arts.… (more)

After the End of Art by Arthur C. Danto
The Contingent Object of Contemporary Art by Martha Buskirk
Theories and Documents of Contemporary Art: A Sourcebook of Artists' Writings (California Studies in the History of Art) by Kristine Stiles
Master Narratives and their Discontents (Theories of Modernism and Postmodernism in the Visual Arts) by James Elkins
Art Since 1900: Modernism, Antimodernism, Postmodernism by Hal Foster
9 more
After Modern Art 1945-2000 (Oxford History of Art) by David Hopkins
Postmodernism (Movements in Modern Art) by Eleanor Heartney
Farewell to an Idea: Episodes from a History of Modernism by T. J. Clark
Modern Art in the Common Culture by Thomas Crow
Theory in Contemporary Art since 1985 by Zoya Kocur; Simon Leung
Theories of Modern Art: A Source Book by Artists and Critics (California Studies in the History of Art) by Herschel B. Chipp
The Return of the Real: The Avante-Garde at the End of the Century by Hal Foster
The Truth in Painting by Jacques Derrida
Meditations On a Hobby Horse and Other Essays On the Theory of Art by E.H. Gombrich
Fewer