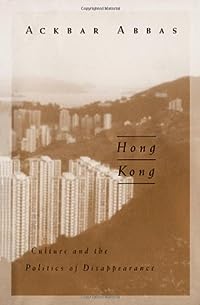 Hong Kong: Culture and the Politics of Disappearance

The Culture of Hong Kong encompasses Jackie Chan and John Woo, British colonial architecture and postmodern skyscrapers. Ironically, it was not until they were faced with the imposition of Mainland power - with the signing of the Sino-British Joint Agreement in 1984 - that the denizens of the colony began the search for a Hong Kong identity. According to Abbas, Hong Kong's peculiar lack of identity is due to its status as "not so much a place as a space of transit," whose residents think of themselves as transients and migrants on their way from China to somewhere else. In this intriguing and provocative exploration of its cinema, architecture, photography, and literature, Ackbar Abbas considers what Hong Kong, with its unique relations to decolonization and disappearance, can teach us about the future of both the colonial city and the global city.… (more)

China on Screen: Cinema and Nation (Film and Culture Series) by Christopher J. Berry
Black Skin, White Masks by Frantz Fanon
The Wretched of the Earth by Frantz Fanon
Engendering China: Women, Culture, and the State (Harvard Contemporary China Series) by Christina K. Gilmartin
Orientalism by Edward W. Said
10 more
The Gender of Memory: Rural Women and China’s Collective Past by Gail Hershatter
Asia/Pacific as Space of Cultural Production (Boundary 2 Book) by Rob Wilson
Modern Chinese literary and cultural studies in the age of theory : reimagining a field by Rey Chow
Modernity At Large: Cultural Dimensions of Globalization (Public Worlds, Vol. 1) by Arjun Appadurai
Woman and Chinese Modernity: The Politics of Reading between West and East (Theory and History of Literature) by Rey Chow
The Condition of Postmodernity: An Enquiry into the Origins of Cultural Change by David Harvey
Woman, Native, Other: Writing Postcoloniality and Feminism by Trinh T. Minh-ha
Making Art Global (Part 2): 'Magiciens de la Terre' 1989 (Exhibition Histories) by Thomas McEvilley
The Location of Culture by Homi K. Bhabha
Art in China by Craig Clunas
Fewer