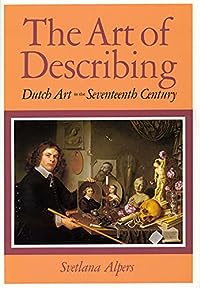 The Art of Describing: Dutch Art in the Seventeenth Century

The art historian after Erwin Panofsky and Ernst Gombrich is not only participating in an activity of great intellectual excitement; he is raising and exploring issues which lie very much at the centre of psychology, of the sciences and of history itself. Svetlana Alpers's study of 17th-century Dutch painting is a splendid example of this excitement and of the centrality of art history among current disciples. Professor Alpers puts forward a vividly argued thesis. There is, she says, a truly fundamental dichotomy between the art of the Italian Renaissance and that of the Dutch masters. . . . Italian art is the primary expression of a 'textual culture, ' this is to say of a culture which seeks emblematic, allegorical or philosophical meanings in a serious painting. Alberti, Vasari and the many other theoreticians of the Italian Renaissance teach us to 'read' a painting, and to read it in depth so as to elicit and construe its several levels of signification. The world of Dutch art, by the contrast, arises from and enacts a truly 'visual culture.' It serves and energises a system of values in which meaning is not 'read' but 'seen, ' in which new knowledge is visually recorded.--George Steiner, Sunday Times There is no doubt that thanks to Alpers's highly original book the study of the Dutch masters of the seventeenth century will be thoroughly reformed and rejuvenated. . . . She herself has the verve, the knowledge, and the sensitivity to make us see familiar sights in a new light.--E. H. Gombrich, New York Review of Books… (more)

Rembrandt's Enterprise: The Studio and the Market by Svetlana Alpers
Patterns of Intention: On the Historical Explanation of Pictures by Michael Baxandall
Ways of Seeing: Based on the BBC Television Series by John Berger
The Painting of Modern Life: Paris in the Art of Manet and his Followers by T. J. Clark
Image of the People: Gustave Courbet and the 1848 Revolution by T. J. Clark
2 more
Patrons and Painters: Art and Society in Baroque Italy by Francis Haskell
Art and Illusion by E. H. Gombrich
Fewer