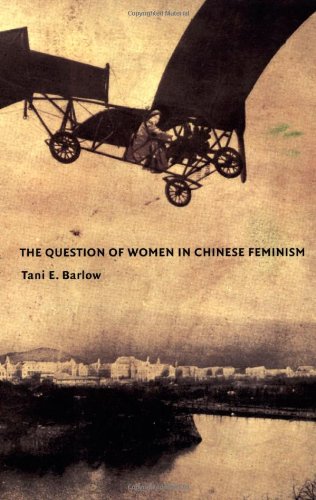 The Question of Women in Chinese Feminism (Next Wave: New Directions in Women's Studies)

The Question of Women in Chinese Feminism is a history of thinking about the subject of women in twentieth-century China. Tani E. Barlow illustrates the theories and conceptual categories that Enlightenment Chinese intellectuals have developed to describe the collectivity of women. Demonstrating how generations of these theorists have engaged with international debates over eugenics, gender, sexuality, and the psyche, Barlow argues that as an Enlightenment project, feminist debate in China is at once Chinese and international. She reads social theory, psychoanalytic thought, literary criticism, ethics, and revolutionary political ideologies to illustrate the range and scope of Chinese feminist theory's preoccupation with the problem of gender inequality. She reveals how, throughout the cataclysms of colonial modernity, revolutionary modernization, and market socialism, prominent Chinese feminists have gathered up the remainders of the past and formed them into social and ethical arguments, categories, and political positions, ceaselessly reshaping progressive Enlightenment sexual liberation theory.… (more)

The Birth of Chinese Feminism: Essential Texts in Transnational Theory by Lydia H. Liu
Other Modernities: Gendered Yearnings in China after Socialism by Lisa Rofel
Postmodernism and China (Boundary 2: An International Journal of Literature and Culture) by Arif Dirlik
Woman, Native, Other: Writing Postcoloniality and Feminism by Trinh T. Minh-ha
Under Confucian Eyes: Writings on Gender in Chinese History by Susan Mann