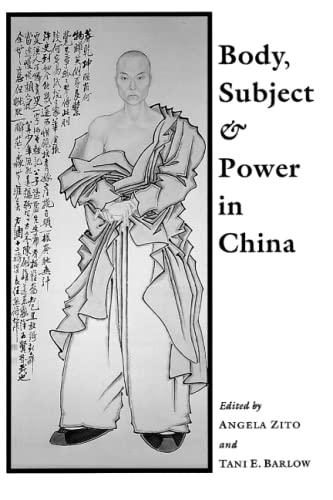 Body, Subject, and Power in China

For the first time, this volume brings to the study of China the theoretical concerns and methods of contemporary critical cultural studies. Written by historians, art historians, anthropologists, and literary critics who came of age after the People's Republic resumed scholarly ties with the United States, these essays yield valuable new insights not only for China studies but also, by extension, for non-Asian cultural criticism. Contributors investigate problems of bodiliness, engendered subjectivities, and discourses of power through a variety of sources that include written texts, paintings, buildings, interviews, and observations. Taken together, the essays show that bodies in China have been classified, represented, discussed, ritualized, gendered, and eroticized in ways as rich and multiple as those described in critical histories of the West. Silk robes, rocks, winds, gestures of bowing, yin yang hierarchies, and cross-dressing have helped create experiences of the body specific to Chinese historical life. By pointing to multiple examples of reimagining subjectivity and renegotiating power, the essays encourage scholars to avoid making broad generalizations about China and to rethink traditional notions of power, subject, and bodiliness in light of actual Chinese practices. Body, Subject, and Power in China is at once an example of the changing face of China studies and a work of importance to the entire discipline of cultural studies.… (more)