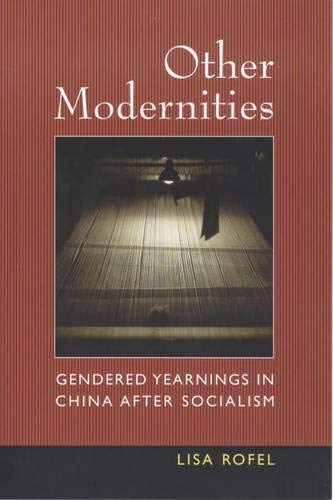 Other Modernities: Gendered Yearnings in China after Socialism

In this analysis of three generations of women in a Chinese silk factory, Lisa Rofel brilliantly interweaves the intimate details of her observations with a broad-ranging critique of the meaning of modernity in a postmodern age. The author based her study at a silk factory in the city of Hangzhou in eastern China. She compares the lives of three generations of women workers: those who entered the factory right around the Communist revolution in 1949, those who were youths during the Cultural Revolution of the 1970s, and those who have come of age in the Deng era. Exploring attitudes toward work, marriage, society, and culture, she convincingly connects the changing meanings of the modern in official discourse to the stories women tell about themselves and what they make of their lives. One of the first studies to take up theoretically sophisticated issues about gender, modernity, and power based on a solid ethnographic ground, this much-needed cross-generational study will be a model for future anthropological work around the world.… (more)

The Birth of Chinese Feminism: Essential Texts in Transnational Theory by Lydia H. Liu
The Gender of Memory: Rural Women and China’s Collective Past by Gail Hershatter
The Question of Women in Chinese Feminism (Next Wave: New Directions in Women's Studies) by Tani E. Barlow
Engendering China: Women, Culture, and the State (Harvard Contemporary China Series) by Christina K. Gilmartin
Some of Us: Chinese Women Growing Up in the Mao Era by Xueping Zhong
8 more
In Other Worlds: Essays In Cultural Politics (Routledge Classics) by Gayatri Chakravorty Spivak
Under Confucian Eyes: Writings on Gender in Chinese History by Susan Mann
Woman, Native, Other: Writing Postcoloniality and Feminism by Trinh T. Minh-ha
Gender in Motion: Divisions of Labor and Cultural Change in Late Imperial and Modern China (Asia/Pacific/Perspectives) by Bryna Goodman
Modern Chinese literary and cultural studies in the age of theory : reimagining a field by Rey Chow
Modernity At Large: Cultural Dimensions of Globalization (Public Worlds, Vol. 1) by Arjun Appadurai
Woman and Chinese Modernity: The Politics of Reading between West and East (Theory and History of Literature) by Rey Chow
Postsocialist Modernity: Chinese Cinema, Literature, and Criticism in the Market Age by Jason McGrath
Fewer