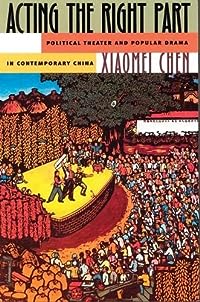 Acting the Right Part is a cultural history of huaju (modern Chinese drama) from 1966 to 1996. Xiaomei Chen situates her study both in the context of Chinese literary and cultural history and in the context of comparative drama and theater, cultural studies, and critical issues relevant to national theater worldwide. Following a discussion of the marginality of modern Chinese drama in relation to other genres, periods, and cultures, early chapters focus on the dynamic relationship between theater and revolution. Chosen during the Cultural Revolution as the exclusive artistic vehicle to promote proletariat art, "model theater" raises important questions about the complex relationships between women, memory, nation/state, revolution, and visual culture. Throughout this study, Chen argues that dramatic norms inform both theatrical performance and everyday political behavior in contemporary China.… (more)