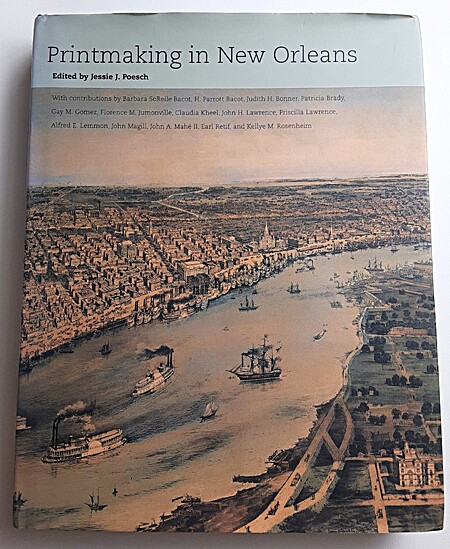 Printmaking in New Orleans contains a wealth of information about the graphic arts in New Orleans. A visually stunning book, spanning cultural strata from highbrow to pop, it is the first publication to examine Louisiana printmaking in depth. Edited and with an introduction by Jessie J. Poesch, Printmaking in New Orleans takes its place among the definitive works of southern cultural history. The book's fourteen chapters were prepared by participants in a symposium organized by the North American Print Conference. The original symposium-sponsored by the Historic New Orleans Collection, the New Orleans Museum of Art, and the Louisiana State Museum-assembled an impressive group of experts familiar with engravings, lithographs, photographs, maps, commercial illustrations, and sheet music of New Orleans. The prints discussed at the symposium-and reproduced in this volume-present an essential visual record of the city's development. Cultural studies of New Orleans traditionally focus on the city's jazz heritage and distinctive architecture. Printmaking in New Orleans opens a window on a unique and hitherto under-represented aspect of regional history. The book traces the development of printmaking from colonial times through the present and features considerable biographical information about the printmakers themselves. The book's subjects include the European publishers who produced books about colonial Louisiana for curious eighteenth-century readers; the eastern-seaboard publishers who produced images of New Orleans in the early nineteenth century; the French and German immigrants who settled in antebellum New Orleans and introduced new lithographic techniques; and the local artists who worked in various print media after the Civil War and throughout the twentieth century. Jessie J. Poesch, New Orleans, Louisiana, is professor emerita of art history at Newcomb College of Tulane University. She is the author of such books as Early Furniture of Louisiana, The Art of the Old South: Painting, Sculpture, Architecture, and the Products of Craftsmen, 1560-1860, and Newcomb Pottery: An Enterprise for Southern Women, 1885-1904. Her work has appeared in such periodicals as the Art Bulletin and American Art Journal.… (more)