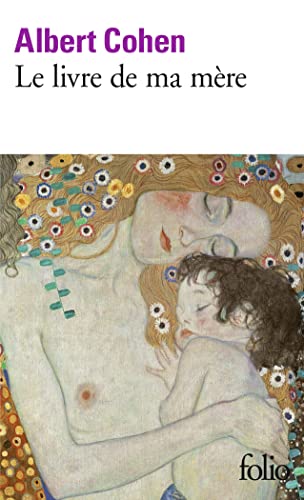 Shortly after Albert Cohen left France for London to escape the Nazis, he received news of his mother's death in Marseilles. Unable to mourn her, he expressed his grief in a series of heartfelt pieces for La France Libre, which he later revised and combined in this moving collection of poignant memoirs. Translated from French by his wife Bella Cohen, it still retains its poignancy as an achingly honest, intimate and moving account and a tribute to all mothers. A heartbreakingly beautiful work by the internationally renowned author.

LibraryThing member kidzdoc
Albert Cohen (1895-1981) was an author and civil servant, whose Greek Jewish parents emigrated to Marseilles soon after his birth. He worked in Geneva through the 1930s, where his mother visited him regularly. He emigrated to Bordeaux and then London in 1940 during the German occupation of France. He urged his elderly and widowed mother, who was in failing health, to move with him to London, but she preferred to remain in Marseilles. Cohen was grief stricken once he learned of her death in 1943. He wrote a series of articles in tribute to her in La France libre during the war, which were later compiled and published as Le Livre de ma mère in 1954. It was translated into English by Bella Cohen, his third wife, and published as Book of My Mother in 1997. Archipelago Books released a new edition this month, which I received through my subscription with the publisher.

The book opens with a flowery ode to his late mother, then provides the reader with a detailed glimpse of his mother, a heavy set but attractive woman who served her husband and son with bottomless devotion and love, regardless of how she was treated by them. Albert was somewhat carefree, and wasted the extra money his mother gave him on the vacuous young women he favored. He subtly rejects his mother's old-fashioned advice, as he prefers to live for the moment and to take advantage of the freedoms that modern society affords him. He does love her, but takes her presence for granted, despite her health problems.

In the middle of the book, Cohen writes to her in sorrow and regret, as he finally realizes how much she meant to him, and how impoverished his life is without her:

I was cruel to you once, and I asked for your forgiveness, which you granted so joyfully. You know, do you not, that I loved you with all my heart. How happy we were together, what chattering accomplices we were—such garrulous good friends, talking interminably. But I could have loved you yet more and written to you each day and given you each day a sense of your importance, which I alone was able to give you and which made so you proud, you who were humble and unacknowledged, my little genius, Maman, my dearest girl.

His anguished cry in this portion of the book brought tears to my eyes, as I thought of my own elderly mother, and know that our days together on earth are numbered. (And, I'm tearing up again as I write this.)

Had the book ended at this point, I would probably have rated it five stars. However, much of the last half of the book is a maudlin and repetitive dirge, with frequent proclamations that "She is dead" and intermittent macabre details about his mother's interment.

He closes the book with a heart felt plea to his readers:

Sons of mothers who are still alive, never again forget that your mothers are mortal. I shall not have written in vain if one of you, after reading my song of death, is one evening gentler with his mother because of me and my mother. Be gentle with your mother each day. Show her more love than I showed my mother. Give your mother some happiness each day, that is what I say to you with the right accorded to me by regret; that is the grave message of a mourner.

This is a difficult book for me to rate. I have settled on a four star rating, as it touched and deeply moved me, and has affected how I view the very good but not perfect relationship I have with my elderly parents. However, the book's latter half was quite disturbing and nearly unreadable to me, as I felt as if I was looking into the intimate thoughts of a mentally disturbed man. I would highly recommend this book, but I would also suggest skipping much of the latter half starting from Chapter 14 and resuming with Chapter 28.… (more)
3 more
LibraryThing member RajivC
This is a really nice, and very sentimental book. It reads like a series of writings rather than as one continuous 'novel'. The writing is beautiful, simple and expresses the emotions beautifully.
From what I can make out, there is no attempt to craft this as a literary work. It is a simple outpouring of emotion, love felt, and regret expressed. I am not used to expressing my sentiments and emotions, and there are times when the book seems a tad mawkish to me, and Albert kicks himself a bit too much. However, this is me expressing this, and not him.
Yet, it is a wonderful reminder that we often don't stop to express emotion until it is too late, and then we have a lifetime of regret to look forward to. "If only I had....."
A wonderful book. I recommend this to anyone who has a mother or father. To anyone who loves deeply.
We move on, and leave our parents behind. This is a mistake, and I thank Albert for this wonderful book.… (more)
LibraryThing member CDVicarage
These were originally written as newspaper or magazine articles so not designed to be read in one go and, although beautifully written, they are overpowering in this format. It’s the same old story: he didn’t appreciate his mother’s love and care as he was growing up and was consumed with guilt when she died.
It has taken me while to get round to reading this ER copy as it was supplied as a pdf and so was not comfortable to read on my kindle and I don’t like to read on a computer screen. I was recently given a tablet which, although still a backlit screen, was easier to hold as I read. This was a fairly short book and I think I might not have managed to read a longer one under these conditions.… (more)
LibraryThing member Osbaldistone
Fine prose, but, perhaps too much on a single topic. There are many marvelous moments in Cohen's long record of mourning for his mother. But these must be read in brief intervals or they become too much of a muchness. Still, a fine collection to have in the library.