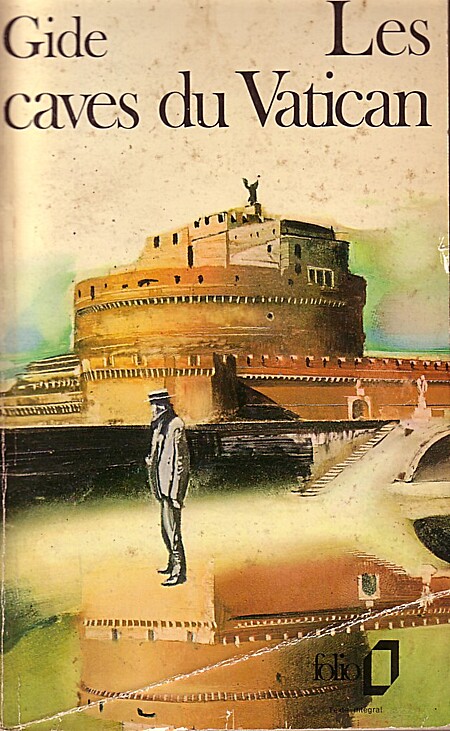 Passing with cinematographic speed across the capitals of Europe, Nobel laureate André Gide's Lafcadio's Adventures is a brilliantly sly satire and one of the clearest articulations of his greatest theme: the unmotivated crime. When Lafcadio Wluiki, a street-smart nineteen-year-old in 1890s Paris, learns that he's heir to an ailing French nobleman's fortune, he's seized by wanderlust. Traveling through Rome in expensive new threads, he becomes entangled in a Church extortion scandal involving an imprisoned Pope, a skittish purveyor of graveyard statuary, an atheist-turned-believer on the edge of insolvency, and all manner of wastrels, swindlers, aristocrats, adventurers, and pickpockets. With characteristic irony, Gide contrives a hilarious detective farce whereby the wrong man is apprehended, while the charmingly perverse Lafcadio--one of the most original creations in all modern fiction--goes free.… (more)

LibraryThing member Dystopos
If Larry David's "Curb Your Enthusiasm" were to suddenly become earnest and subtle in addition to being keen and tightly-knit, then it might feel something like Lafcadio's Adventures. Gide's character introductions are charming, witty and delectable, but when he starts stirring up the plot and you begin to see how every twist draws more threads into the tapestry, its impossible not be be swept up.

Billed as Gide's most elaborate exploration of the "gratuitous act" or "unmotivated crime", that aspect of the work is only the nucleus around which spiral a varied cast of characters. Just as the theme of "Adaptation" percolates through the film of the same name, the theme of senseless action caroms between the players in this short novel set at the tipping point between staid 19th century European tradition and the thrill of life in the age of technology.… (more)
6 more
LibraryThing member katpooh
What a slog! This was a prize winner and perhaps it was considered risque and advanced when it was first written, but I found it deadly dull and hard to plow through. What was the point?
LibraryThing member GlebtheDancer
I usually hate farce, and 'Lafcadio's Adventures' is definitely that, but this is not one I struggled with. Gide's book is a serious philosophical musing on the nature of guilt and justice, and poses the question that if crime is committed in the absence of motive, how can we judge the punishment? It preceeds the growth of existentialism by a couple of decades, but is definitely a marker on the road leading from writers like Dostoevsky to Satre and Camus. The farcical storeyline actually helps to remove a lot of the weight from the reader so that, although important issues are being addresed, we are allowed to have a bit of fun in the process. Like all farces, it stretches the narrative a bit far, relying on a series of unlikely coincidences and chance meetings to drive the plot, which always irritates me. Lafcadio is a classical rogue and the victims of his swindlings are dunces to an almost embarrassing degree (embarrassing for Gide, not them), but somehow the book as a whole just worked for me. I read it quickly and easily, absorbing the message while enjoying the plot, and will be looking for more Gide in the future.… (more)
LibraryThing member GingerbreadMan
Anthime, a die-hard atheist, finds himself cured of his arthritis, apparently by the prayers of his angelic niece. He makes a public confession to being saved, and is shunned by his Freemason friends. His brother-in-law Julius, a writer of pathetic novels filled with religious sentiment, is finding out on his father’s deathbed that he has a brother born out of wedlock. This is Lefcadio, a nineteen year old, amoral creature full of daring and lust for life, and an interest for crimes without motives. His old schoolfriend Protos is involved in a scam to swindle rich Frenchmen out of their money to finance a rescue operation for the True Pope, said to be jailed by Freemasons in the cellars of the Vatican. However, Julius other brother-in-law Amedée won’t settle for just donating funds, but heads to Rome to free the pope himself…

This book is constructed like a farce, and is there is indeed a lot going on in just over 200 pages here. But the twists can’t quite mask the fact that there is no core here, save a mocking of a religious bourgeoisie that hasn’t really aged well. There are a few smirks here, but in the end, when the story desperately tries to become something more real and profound, it shows to be mostly gestures. Mildly amusing.… (more)
LibraryThing member Welsh_eileen2
A well translated novel.
A funny unique story.Good to have the old stories brought to the fore again.
I received a digital copy from the publishers via Netgalley in return for an honest unbiased review.
LibraryThing member AnesaMiller
Possible spoiler--

Despite my expectation that Gide must be a thoroughly anti-establishment writer, developments in this racy and sometimes humorous narrative place the author in company with Dan Quayle and other conservatives who’ve decried the evil effects of illegitimate births & child-rearing. Lafcadio’s “unmotivated crime” comes to pass as a result of his rootless lifestyle and devotion to fleeting amusements. The evil impulse fills an emptiness where attachment is lacking. His mother’s wanton ways in passing him from uncle to uncle clearly established the unfortunate pattern! And despite being drawn to pleasure, Lafcadio is also a bit of a Buddhist: he enters the void outside of social convention and even finds it possible to “quit a society as simply as all that, without stepping at the same moment into another…” A very interesting read!… (more)
LibraryThing member albertgoldfain
The first work I have read by Gide after reading his name mentioned on many occasions. A well structured and thought-provoking novel saturated in meaning. The whirlwind pace and moments of Ripleyesque rationalized (yet motive free) criminality make this a very intense read.
Fewer