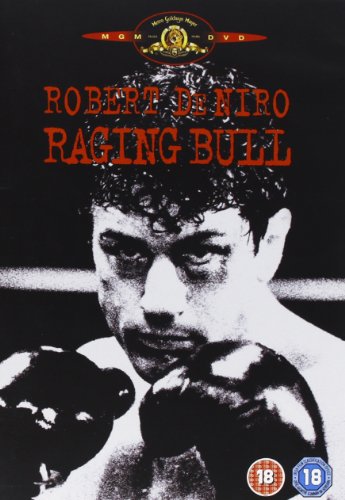 Jake La Motta is a boxer whose psychological and sexual complexities erupt into violence both in and out of the ring. His brother Joey falls prey to Jake's mounting paranoia and jealousy, while fifteen-year-old Vickie, becomes Jake's wife and most prized trophy. The same anger that drives Jake in the ring, ultimately drives him to beat his wife and brother, and sends Jake down a self-destructive spiral of paranoia and rage.

LibraryThing member comfypants
A boxer is an abusive jackass.

It has some redeeming value, a handful of nice scenes. 90% of the movie is just tedious, though. He's a jackass, then he does some boxing, then he's a jackass some more, wash, rinse, repeat. Oh, except that in the second half of the movie there's no more boxing. I have no idea why this guy is the jackass he is; he just starts that way and keeps going without change or break though the whole movie. I have even less idea why Scorsese thinks we should care about his life.