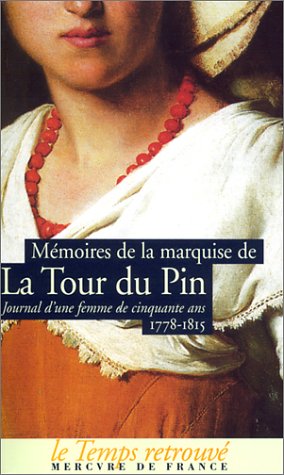 "Madame de La Tour du Pin was born Henrietta-Lucy Dillon in Paris in 1770. An aristocrat, she spent her youth surrounded by the luxury of the court of Louis XVI and Marie Antoinette. Married in her teens to the future Marquis de La Tour du Pin, she seemed destined to a life of pleasure-seeking and extravagance. Then came the Revolution and the world of the French aristocracy fell apart. The guillotine threatened all her class and, after the execution of the king, Madame de La Tour du Pin fled Paris to her properties elsewhere in France. All had been plundered and she was forced into exile, first in Holland, then England and, finally, America. Only as a penniless emigre could she return at last to Paris. Written originally for her only child, her Memoirs provide a vivid account of 18th century aristocratic life and the Revolution that destroyed it. "… (more)

LibraryThing member bhowell
Madame de la Tour Du Pin was a prominent strong woman in the midst of the French revolution and her story is a powerful one. She survived and saved her family and was highly respected at the time for her intelligence. I highly recommend this book. Her memoirs have been published many times previously but this one is readily available.… (more)
2 more
LibraryThing member AdonisGuilfoyle
Excellent, amusing first-hand account of life during the late-eighteenth, early nineteenth centuries. Lucy de la Tour du Pin, nee Dillon, is a wry, witty, courageous and observant woman, leading the reader through the events of her life as she remembers it - the translator occasionally corrects Mme de la Tour's memory in footnotes, but the errors are mostly due to the distance of years and not the adulteration of fact. That said, the false modesty of the writing does tend to jar with the writer's healthy ego, but the result is endearing and not offputting. Recommended to anybody with a taste for historical fiction, as her memoirs are entertaining and the language accessible. This woman lived an incredible life - from Lady in Waiting to poor Marie Antoinette to an ardent supporter of Napoleon, through half of Europe with her husband and via a pioneer homestead in America, all the while suffering many personal tragedies. Fact is truly more thrilling than fiction!… (more)
LibraryThing member camelama
Wonderful memoirs of a woman who lived through some of the most turbulent, frightening, fascinating, and fantastic times in world history. Going from the Queen's lady in waiting, to hiding from the revolutionaries and sewing peasant clothes, immigrating to America, and then all the rest of her topsy turvy life ... it's a book I thought about when I wasn't reading it. I wanted to stop whatever I was doing and go back to reading it. I went without sleep to finish it - and wanted more more more.… (more)
Fewer