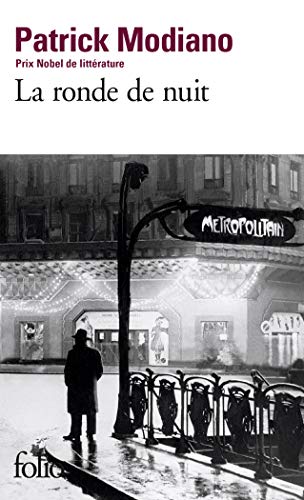 When Patrick Modiano was awarded the 2014 Nobel Prize for LIterature he was praised for using the 'art of memory' to bring to life the Occupation of Paris during the Second World War. The Night Watch is his second novel and tells the story of a young man of limited means, caught between his work for the French Gestapo informing on the Resistance, and his work for a Resistance cell informing on the police and the black market dealers whose seedy milieu of nightclubs, prostitutes and spivs he shares. Under pressure from both sides to inform and bring things to a crisis, he finds himself driven towards an act of self-sacrifice as the only way to escape an impossible situation and the question that haunts him how to be a traitor without being a traitor. In this astonishing, cruel and tender book, Modiano attempts to exorcise the past by leading his characters out on a fantasmagoric patrol during one fatal night of the Occupation.… (more)

LibraryThing member Eyejaybee
I didn’t like this book at all. In fact, let’s take the gloves off and tell it straight. I actively and passionately disliked this appalling book. The publisher’s blurb led me to expect a beautifully written exploration of the life of a man caught on a desperate dilemma, living a life as a double agent engaged with both the Resistance and the Gestapo in occupied France during the Second World War. I have seldom been sold a bigger dummy.

The book starts with a garbled and inchoate account of a gathering of ghastly characters behaving in an unrelentingly implausible manner, and then just goes downhill from there. I struggle enough to get through most days without at least fleetingly thinking about hanging myself, without being immersed in such an unwholesome broth of rage, squalor and despair. If this is even vaguely representative of Patrick Modiano’s oeuvre as a whole, then I can't understand how he won the Nobel Prize for Literature. Perhaps that year the Selection Committee was modelling itself on FIFA.… (more)