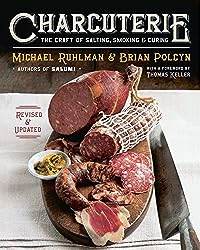 Charcuterie: The Craft of Salting, Smoking, and Curing (Revised and Updated)

Charcuterie exploded onto the scene in 2005 and encouraged an army of home cooks and professional chefs to start curing their own foods. This love song to animal fat and salt has blossomed into a bona fide culinary movement, throughout America and beyond, of curing meats and making sausage, p?t?s, and confits. Charcuterie: Revised and Updated will remain the ultimate and authoritative guide to that movement, spreading the revival of this ancient culinary craft. Early in his career, food writer Michael Ruhlman had his first taste of duck confit. The experience "became a fascination that transformed into a quest" to understand the larger world of food preservation, called charcuterie, once a critical factor in human survival. He wondered why its methods and preparations, which used to keep communities alive and allowed for long-distance exploration, had been almost forgotten. Along the way he met Brian Polcyn, who had been surrounded with traditional and modern charcuterie since childhood. "My Polish grandma made kielbasa every Christmas and Easter," he told Ruhlman. At the time, Polcyn was teaching butchery at Schoolcraft College outside Detroit. Ruhlman and Polcyn teamed up to share their passion for cured meats with a wider audience. The rest is culinary history. Charcuterie: Revised and Updated is organized into chapters on key practices: salt-cured meats like pancetta, dry-cured meats like salami and chorizo, forcemeats including p?t?s and terrines, and smoked meats and fish. Readers will find all the classic recipes: duck confit, sausages, prosciutto, bacon, p?t? de campagne, and knackwurst, among others. Ruhlman and Polcyn also expand on traditional mainstays, offering recipes for hot- and cold-smoked salmon; shrimp, lobster, and leek sausage; and grilled vegetable terrine. All these techniques make for a stunning addition to a contemporary menu. Thoroughly instructive and fully illustrated, this updated edition includes seventy-five detailed line drawings that guide the reader through all the techniques. With new recipes and revised sections to reflect the best equipment available today, Charcuterie: Revised and Updated remains the undisputed authority on charcuterie.… (more)

The River Cottage Meat Book by Hugh Fearnley-Whittingstall
The Art of Charcuterie by The Culinary Institute of America
Professional Charcuterie: Sausage Making, Curing, Terrines, and Pts by John Kinsella
The French Laundry Cookbook by Thomas Keller
In The Charcuterie: The Fatted Calf's Guide to Making Sausage, Salumi, Pates, Roasts, Confits, and Other Meaty Goods by Taylor Boetticher
22 more
Bruce Aidells's Complete Sausage Book : Recipes from America's Premium Sausage Maker by Bruce Aidells
The Art of Fermentation: An In-Depth Exploration of Essential Concepts and Processes from Around the World by Sandor Ellix Katz
Pork and Sons by Stéphane Reynaud
Bouchon by Thomas Keller
Fat: An Appreciation of a Misunderstood Ingredient, with Recipes by Jennifer McLagan
On Food and Cooking: The Science and Lore of the Kitchen by Harold McGee
Momofuku by David Chang
Ad Hoc at Home by Thomas Keller
A Girl and Her Pig: Recipes and Stories by April Bloomfield
Cooking by Hand by Paul Bertolli
The Zuni Cafe Cookbook: A Compendium of Recipes and Cooking Lessons from San Francisco's Beloved Restaurant by Judy Rodgers
Smoke & Spice: Cooking with Smoke, the Real Way to Barbecue by Cheryl Alters Jamison
Sauces: Classical and Contemporary Sauce Making by James Peterson
Anthony Bourdain's "Les Halles" Cookbook: Classic Bistro Cooking by Anthony Bourdain
Ratio: The Simple Codes Behind the Craft of Everyday Cooking by Michael Ruhlman
The New Charcuterie Cookbook: Exceptional Cured Meats to Make and Serve at Home by Jamie Bissonnette
Bruce Aidells's Complete Book of Pork: A Guide to Buying, Storing, and Cooking the World's Favorite Meat by Bruce Aidells
Under Pressure: Cooking Sous Vide by Thomas Keller
The Great Book of Sausages by Antony Hippisley Coxe
The bread baker's apprentice : mastering the art of extraordinary bread by Peter Reinhart
All About Braising: The Art of Uncomplicated Cooking by Molly Stevens
Modernist Cuisine: The Art and Science of Cooking by Nathan Myhrvold
Fewer