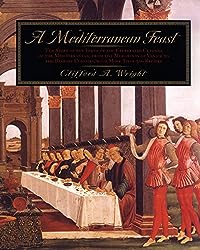 A Mediterranean Feast: The Story of the Birth of the Celebrated Cuisines of the Mediterranean from the Merchants of Venice to the Barbary Corsairs, with More than 500 Recipes

by Clifford A. Wright

A groundbreaking culinary work of extraordinary depth and scope that spans more than one thousand years of history, A Mediterranean Feast tells the sweeping story of the birth of the venerated and diverse cuisines of the Mediterranean. Author Clifford A. Wright weaves together historical and culinary strands from Moorish Spain to North Africa, from coastal France to the Balearic Islands, from Sicily and the kingdoms of Italy to Greece, the Balkan coast, Turkey, and the Near East. The evolution of these cuisines is not simply the story of farming, herding, and fishing; rather, the story encompasses wars and plagues, political intrigue and pirates, the Silk Road and the discovery of the New World, the rise of capitalism and the birth of city-states, the Crusades and the Spanish Inquisition, and the obsession with spices. The ebb and flow of empires, the movement of populations from country to city, and religion have all played a determining role in making each of these cuisines unique. In A Mediterranean Feast, Wright also shows how the cuisines of the Mediterranean have been indelibly stamped with the uncompromising geography and climate of the area and a past marked by both unrelenting poverty and outrageous wealth. The book's more than five hundred contemporary recipes (which have been adapted for today's kitchen) are the end point of centuries of evolution and show the full range of culinary ingenuity and indulgence, from the peasant kitchen to the merchant pantry. They also illustrate the migration of local culinary predilections, tastes for food and methods of preparation carried from home to new lands and back by conquerors, seafarers, soldiers, merchants, and religious pilgrims. A Mediterranean Feast includes fourteen original maps of the contemporary and historical Mediterranean, a guide to the Mediterranean pantry, food products resources, a complete bibliography, and a recipe and general index, in addition to a pronunciation key. An astonishing accomplishment of culinary and historical research and detective work in eight languages, A Mediterranean Feast is required--and intriguing--reading for any cook, armchair or otherwise.… (more)

The Cooking of the Eastern Mediterranean: 215 Healthy, Vibrant, and Inspired Recipes by Paula Wolfert
The Splendid Table: Recipes from Emilia-Romagna, the Heartland of Northern Italian Food by Lynne Rossetto Kasper
Mediterranean Vegetables: A Cook's ABC of Vegetables and Their Preparation by Clifford A. Wright
The Oxford Companion to Food 2nd Ed by Alan Davidson
The Slow Mediterranean Kitchen: Recipes for the Passionate Cook by Paula Wolfert
14 more
Flatbreads & Flavors: A Baker's Atlas by Jeffrey Alford
Arabesque: A Taste of Morocco, Turkey, and Lebanon by Claudia Roden
Catalan Cuisine by Colman Andrews
Delicioso! The Regional Cooking of Spain by Penelope Casas
Paula Wolfert's world of food: A collection of recipes from her kitchen, travels, and friends by Paula Wolfert
A Drizzle of Honey : The Lives and Recipes of Spain's Secret Jews by David M. Gitlitz
The New Making of a Cook: The Art, Techniques, And Science Of Good Cooking by Madeleine Kamman
The Classical Cookbook: Revised Edition by Andrew Dalby
The New Book of Middle Eastern Food by Claudia Roden
The Essential Mediterranean: How Regional Cooks Transform Key Ingredients into the World's Favorite Cuisines by Nancy Harmon Jenkins
The Art of Cooking: The First Modern Cookery Book (California Studies in Food and Culture) by Maestro Martino of Como
Vegetables from Amaranth to Zucchini: The Essential Reference: 500 Recipes, 275 Photographs by Elizabeth Schneider
The Art of Eating Well: An Italian Cookbook by Pellegrino Artusi
Hot Sour Salty Sweet: A Culinary Journey Through Southeast Asia by Jeffrey Alford
Fewer