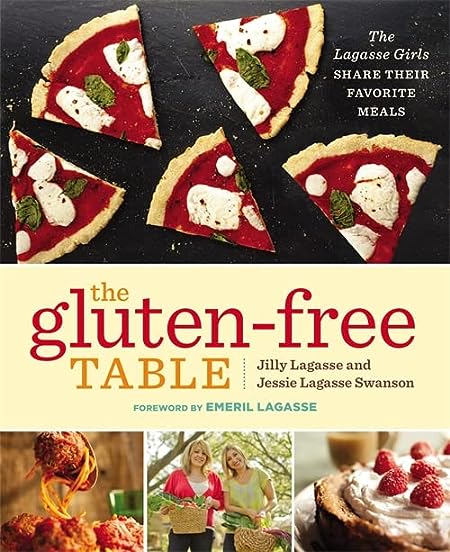 The Gluten-Free Table: The Lagasse Girls Share Their Favorite Meals

"Imagine growing up with a father known for his rich, Creole-style cooking, who instilled a love and appreciation of food from the very start. Now imagine not being able to eat most of his dishes anymore. That's what happened to Jilly and Jessie Lagasse when they were diagnosed with gluten allergies in 2001 and 2004, respectively. So they learned to adjust, changing the ways they cooked, ate, and used ingredients. THE GLUTEN-FREE TABLE provides a well-balanced base of recipes that can add flavor and enjoyment to the menus of even the most demanding gluten-free eaters. With appetizers, soups, salads, sides, entrées, and desserts, the book has something for everyone. Featuring family favorites, Southern classics, and a few of Jilly's and Jessie's own culinary anecdotes thrown in, readers will delight in this compendium that includes recipes for Sweet 'n' Sticky Chicken Drumsticks, Hearty Butter Bean and Ham Soup, Jalapeño and Cheddar Cornbread, Slow-Cooked Rosemary Chicken with Apples and Fennel, Maple Syrup Johnnycakes with Ice Cream, and more!"--… (more)