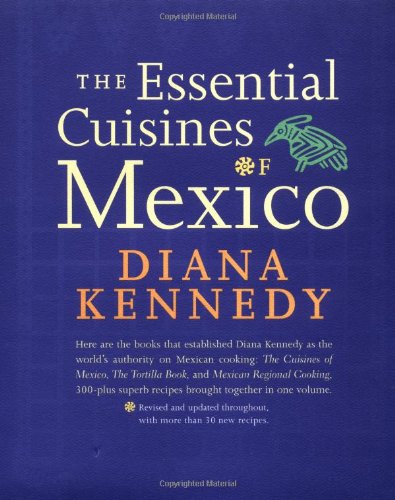 The Essential Cuisines of Mexico: Revised and updated throughout, with more than 30 new recipes.

More than twenty-five years ago, when Diana Kennedy published The Cuisines of Mexico, knowledge and appreciation of authentic Mexican cooking were in their infancy. But change was in the air. Home cooks were turning to Julia Child for an introduction to French cuisine and to Marcella Hazan for the tastes of Italy. Through Diana Kennedy they discovered a delicious and highly developed culinary tradition they barely knew existed. The Cuisines of Mexico, Mexican Regional Cooking, and The Tortilla Book became best-sellers, and Diana Kennedy was recognized as the authority on Mexican food.Now a new generation has discovered that Mexican food is more than chimichangas, that they can find fresh hierbas de olor (pot herbs, including marjoram and Mexican bayleaf) and chilacas in their markets. The book that will become indispensable in their kitchens is The Essential Cuisines of Mexico.Diana has combined her three classic books in one volume, refining recipes when possible, bringing them up to date without losing the spirit of their generation. Old friends will be delighted to revisit these refreshed classics and to find more than thirty new recipes from different regions of Mexico. Among these discoveries are the very popular arroz a la tumbada (rice with seafood) from Veracruz, a pico de gallo with peaches from the state of Mexico, and tasty snacks from the cantinas of Merida.Newcomers will delight in Diana's "word pictures" -- descriptions of her travels and discoveries -- and in her off-the-cuff comments. Whether they turn to this book for the final word on tamales, recipes for tasty antojitos to serve with drinks, or superb tacos, they will find there is no better teacher of Mexican food. How enviable to attempt for the first time Calzones del Diablo (yes, the Devil's Pants), and what a pleasure to succumb to Diana's passion for Mexican food.… (more)

The Essential Cuisines of Mexico: Revised and updated throughout, with more than 30 new recipes. by Diana Kennedy (Hardcover)

Authentic Mexican 20th Anniversary Ed: Regional Cooking from the Heart of Mexico by Rick Bayless
The Art of Mexican Cooking by Diana Kennedy
Mexico One Plate At A Time by Rick Bayless
Mexican Everyday by Rick Bayless
The New Complete Book of Mexican Cooking by Elisabeth Lambert Ortiz
24 more
Land of plenty : a treasury of authentic Sichuan cooking by Fuchsia Dunlop
Into the Vietnamese Kitchen: Treasured Foodways, Modern Flavors by Andrea Nguyen
Essentials of Classic Italian Cooking by Marcella Hazan
Hot Sour Salty Sweet: A Culinary Journey Through Southeast Asia by Jeffrey Alford
The Border Cookbook: Authentic Home Cooking of the American Southwest and Northern Mexico by Cheryl Alters Jamison
Cradle of Flavor: Home Cooking from the Spice Islands of Indonesia, Singapore, and Malaysia by James Oseland
Cooking by Hand by Paul Bertolli
The New Portuguese Table: Exciting Flavors from Europe's Western Coast by David Leite
Thai Food by David Thompson
The Zuni Cafe Cookbook: A Compendium of Recipes and Cooking Lessons from San Francisco's Beloved Restaurant by Judy Rodgers
The Slow Mediterranean Kitchen: Recipes for the Passionate Cook by Paula Wolfert
Encarnación's Kitchen: Mexican Recipes from Nineteenth-Century California, Selections from Encarnación Pinedo's El cocinero español (California Studies in Food and Culture) by Encarnación Pinedo
Cantina: The Best of Casual Mexican Cooking (Casual Cuisines of the World) by Susan Feniger
Tapas: A Taste of Spain in America by Jose Andres
Arabesque: A Taste of Morocco, Turkey, and Lebanon by Claudia Roden
Beyond the Great Wall: Recipes and Travels in the Other China by Jeffrey Alford
Oaxaca al Gusto: An Infinite Gastronomy (The William and Bettye Nowlin Series in Art, History, and Culture of the Western Hemisphere) by Diana Kennedy
Sunday Suppers at Lucques: Seasonal Recipes from Market to Table by Suzanne Goin
Pati's Mexican Table: The Secrets of Real Mexican Home Cooking by Pati Jinich
The Tex-Mex Cookbook: A History in Recipes and Photos by Robb Walsh
Mastering the Art of Chinese Cooking by Eileen Yin-Fei Lo
Burma: Rivers of Flavor by Naomi Duguid
Catalan Cuisine by Colman Andrews
The New Book of Middle Eastern Food by Claudia Roden
Fewer