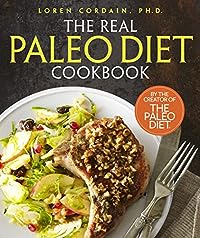 The return of the true Paleo diet with 250 enticing recipes that prove following The Paleo Diet is as delicious, inventive, and inspiring as it is healthy It's official--thereal Paleo Diet is back. Loved for its simplicity, health benefits, and because it really works, the diet has been widely imitated since its release. Yet no one knows this plan better than Loren Cordain, its creator. As an expert in evolutionary medicine, Cordain realized we had moved away from the foods we were designed to eat--lean proteins, fruits, and vegetables--while modern staples such as sugar, salt, and carbohydrates were creating a host of 21st-century health issues, including obesity and heart disease. By eating the right food, people are healthier. But can eating Paleo be tasty? In this all-new cookbook with 250 recipes and 75 photos, Cordain makes eating Paleo a pleasure, not a burden. Ranging from Cucumber Aqua Fresca to Fruit-Stuffed Top Loin Roast with Brandy Sauce, the recipes satisfy even the most finicky. This is the book the Paleo community has been waiting for--scientific accuracy combined with great taste.… (more)