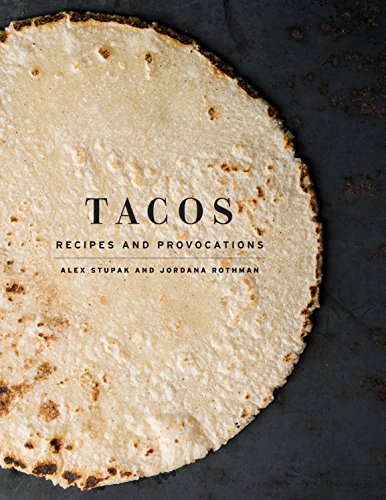 Superstar chef Alex Stupak's love of real Mexican food changed his life; it caused him to quit the world of fine-dining pastry and open the smash-hit Empellón Taqueria in New York City. Now he'll change the way you make--and think about--tacos forever.    Tacos is a deep dive into the art and craft of one of Mexico's greatest culinary exports. Start by making fresh tortillas from corn and flour, and variations that look to innovative grains and flavor infusions. Next, master salsas, from simple chopped condiments to complex moles that simmer for hours and have flavor for days. Finally, explore fillings, both traditional and modern--from a pineapple-topped pork al pastor to pastrami with mustard seeds.    But Tacos is more than a collection of beautiful things to cook. Wrapped up within it is an argument: Through these recipes, essays, and sumptuous photographs by Evan Sung, the 3-Michelin-star veteran makes the case that Mexican food should be as esteemed as the highest French cooking.… (more)

Mexico from the Inside Out by Enrique Olvera
Bar Tartine: Techniques & Recipes by Cortney Burns
State Bird Provisions: A Cookbook by Stuart Brioza
Koreatown: A Cookbook by Deuki Hong
Flour, Too: Indispensable Recipes for the Cafe's Most Loved Sweets & Savories by Joanne Chang
13 more
A Girl and Her Pig: Recipes and Stories by April Bloomfield
Vietnamese Home Cooking by Charles Phan
Tacopedia by Deborah Holtz
Mastering pasta : the art and practice of handmade pasta, gnocchi, and risotto by Marc Vetri
The Slanted Door: Modern Vietnamese Food by Charles Phan
Nueva Salsa: Recipes to Spice It Up by Rafael Palomino
Phoenix Claws and Jade Trees: Essential Techniques of Authentic Chinese Cooking by Kian Lam Kho
Fonda San Miguel: Thirty Years Of Food And Art by Tom Gilliland
The Art of Living According to Joe Beef: A Cookbook of Sorts by David McMillan
Milk Bar Life: Recipes & Stories by Christina Tosi
A Girl and Her Greens: Hearty Meals from the Garden by April Bloomfield
Tamales by Mark Miller
Culinary Artistry by Andrew Dornenburg
Fewer