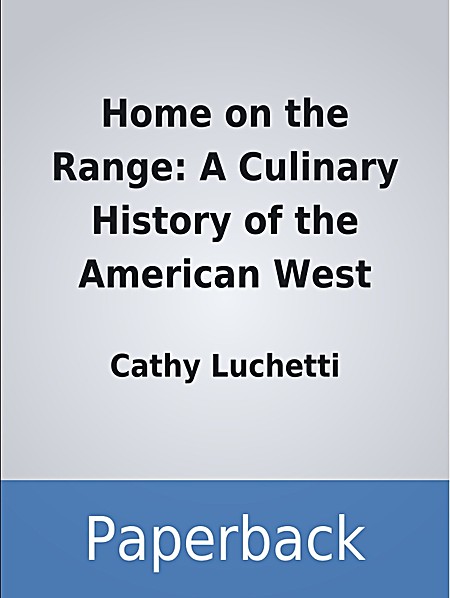 Home on the Range: A Culinary History of the American West

This colorful account of cooking on the frontier from 1700 to 1915 describes the foods, preparation techniques, and recipes of pioneers by providing excerpts from their diaries, journals, and letters. Every kind of pioneer seems included: seafarers, trappers, military personnel, cowboys, homesteaders, clerics, mountain men, boarding-house cooks, chuck wagons on the cattle drives, various ethnic groups, etc. By profiling selected individuals in each category and weaving together their stories, recipes, and photographs (unseen), the author illustrates how the pioneering process democratized cooking and contributed to the culinary pluralism of the Old West. Dependent upon the weather, which determined available crops and food sources such as deer, wild fowl, and fish, many settlers subsisted on meager rations. Many original recipes are given, such as "A Recite for Peach Cordial," which calls for two gallons of "good old whiskey," and for cake made from flour and water shortened with coon oil and fried in coon fat, complete with actual spellings and abundant capitalizations. Documented throughout with primary sources, this well-researched history is amusing as well as educational. Black-and-white photographs poignantly and emphatically illustrate the harshness of their lives and the primitiveness of their facilities.… (more)

American gourmet : classic recipes, deluxe delights, flamboyant favorites, and swank "company" food from the '50s and '60s by Jane Stern
We Are What We Eat: Ethnic Food and the Making of Americans by Donna R. Gabaccia
Dungeness Crabs and Blackberry Cobblers: The North by Janie Hibler
America Eats: Forms of Edible Folk Art by William Woys Weaver
The South American Cook Book: Including Central America, Mexico, and the West Indies by Cora Lovisa Brown
13 more
Food: A Culinary History (European Perspectives) by Jean-Louis Flandrin
The American Century Cookbook: The Most Popular Recipes of the 20th Century by Jean Anderson
The Food of Southern Italy by Carlo Middione
Antoine's Restaurant Cookbook, Since 1840: A Collection of the Original Recipes from New Orleans' Oldest and Most Famous Restaurant by Roy F. Guste
How America eats by Clementine Paddleford
The Harvey House Cookbook: Memories of Dining Along the Santa Fe Railroad by George H. Foster
Biba's Northern Italian Cooking by Biba Caggiano
I Hear America Cooking by Betty Fussell
The best in American cooking; recipes by Clementine Paddleford
Southern Food: At Home, on the Road, in History by John Egerton
THE FIRST LADIES COOKBOOK Favorite Recipes of the Presidents (1969 Large format hardcover 228 pages including Index, Revised Edition US PRESIDENTS Favorites WASHINGTON through NIXON) by Parents Magazine Press
Food: The History of Taste (California Studies in Food and Culture) by Paul Freedman
The Williams-Sonoma Cookbook and Guide to Kitchenware by Chuck Williams
Fewer