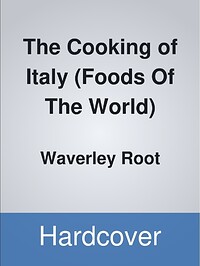 The Cooking of Italy (Foods Of The World)

"As beguiling and delectable as France itself." *Mimi Sheraton "Ann Barry tells her tale directly and clearly, without cloying artifice or guile, so that it has the warmth, honesty, and force of a long letter from an old friend. She makes her reader a welcome house guest in her much-loved little cottage in the heart of France." *Susan Allen Toth Ann Barry was a single woman, working and living in New York, when she fell in love with a charming house in Carennac in southwestern France. Even though she knew it was the stuff of fantasy, even though she knew she would rarely be able to spend more than four weeks a year there, she was hooked. This spirited, captivating memoir traces Ms. Barry's adventures as she follows her dream of living in the French countryside: Her fascinating (and often humorous) excursions to Brittany and Provence, charmed nights spent at majestic chateaux and back-road inns, and quiet moments in cool Gothic churches become our own. And as the years go by, and "l' Americaine," as she is known, returns again and again to her real home, she becomes a recognizable fixture in the neighborhood. Ann Barry is a foreigner enchanted with an unpredictable world that seems constantly fresh and exciting. In this vivid memoir, she shares the colorful world that is her France. "AN INTELLIGENT MEMOIR." *The New Yorker "DELIGHTFUL . . . BARRY WRITES ENGAGINGLY. . . . She] is very much at home in such fine company as M.F.K. Fisher's Two Towns in Provence, Robert Daley's Portraits of France, and Richard Goodman's French Dirt. *St. Louis Post-Dispatch "From the Trade Paperback edition."… (more)

Time-Life: Foods of the World (Features)

Bugialli on pasta by Giuliano Bugialli
The Splendid Table: Recipes from Emilia-Romagna, the Heartland of Northern Italian Food by Lynne Rossetto Kasper
La Cucina: The Regional Cooking of Italy by The Italian Academy of Cuisine
Flavors of Puglia by Nancy Harmon Jenkins
Recipes: The Cooking of the British Isles (Foods of the World) by By the Editors of Time-life Books