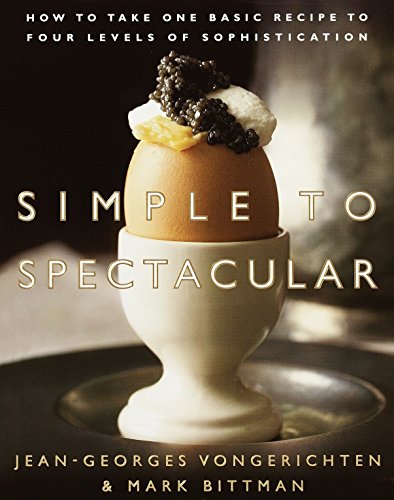 Simple to Spectacular: How to Take One Basic Recipe to Four Levels of Sophistication

What happens when a four-star chef and a culinary minimalist decide to join forces to create something different? They invent a new style that adapts to every occasion and every level of cooking expertise. Simple to Spectacular introduces a unique concept developed by one of the world's top chefs, Jean-Georges Vongerichten, and Mark Bittman, author of How to Cook Everything and the New York Times's hugely popular column "The Minimalist." Ever since their award-winning collaboration on Jean-Georges: Cooking at Home with a Four-Star Chef, the acclaimed duo has been cooking up a repertoire of new dishes that can be prepared in any of five progressively sophisticated ways. Simple to Spectacular features a total of 250 recipes in 50 groups. Each group begins with a simple, elegant recipe--a few ingredients combined for maximum effect--followed by fully detailed, increasingly elaborate variations. For example, a recipe for Grilled Shrimp with Thyme and Lemon leads to Grilled Shrimp and Zucchini on Rosemary Skewers, Grilled Shrimp with Apple Ketchup, Thai-style Grilled Shrimp on Lemongrass Skewers, and Grilled Shrimp Balls with Cucumber and Yogurt. Every aspect of the meal is covered, from superb soups and salads to unforgettable side dishes, entrees, and desserts. In Simple to Spectacular, everything--from the basics to innovations by a four-star chef--is tailored for a quick Tuesday night dinner or an elegant weekend party.nbsp;nbsp;And in the now-classic Vongerichten-Bittman style, all of the recipes can be made in the kitchen of any home cook. With 80 full-color photographs giving a mouthwatering view of the Simple-to-Spectacular transformations, readers and cooks will eagerly explore the possibilities.Jean-Georges Vongerichten (right) won the 1998 James Beard Award for Outstanding Chef and Best New Restaurant. His Manhattan restaurants include Vong, Jo Jo, The Mercer Kitchen, and Jean Georges, which earned a rare four-star rating from the New York Times.nbsp;nbsp; In Simple to Spectacular, two titans of the food world have created a truly groundbreaking cookbook.nbsp;nbsp;Here are 250 superb recipes arranged in a uniquely useful way: a basic recipe and four increasingly sophisticated variations, with each group (there are 50 groups in all) based on a given technique.nbsp;nbsp;This ingenious organization enables cooks of all levels of expertise to understand how a recipe is created and to re-create the brilliantly simple recipes and dazzling variations from one of our best food writers and home cooks teamed with one of America's greatest chefs.… (more)

The Dean and DeLuca Cookbook by David Rosengarten
Le Bernardin Cookbook: Four-Star Simplicity by Eric Ripert
Happy in the Kitchen: The Craft of Cooking, the Art of Eating by Michel Richard
Julia and Jacques Cooking at Home by Julia Child
Alfred Portale's Twelve Seasons Cookbook: A Month-by-Month Guide to the Best There is to Eat by Alfred Portale
29 more
Daniel Boulud's Cafe Boulud Cookbook: French-American Recipes for the Home Cook by Daniel Boulud
Essentials of Cooking by James Peterson
The Zuni Cafe Cookbook: A Compendium of Recipes and Cooking Lessons from San Francisco's Beloved Restaurant by Judy Rodgers
The Minimalist Cooks at Home: Recipes That Give You More Flavor from Fewer Ingredients in Less Time by Mark Bittman
Chez Panisse Cooking by Paul Bertolli
Second Helpings from Union Square Cafe: 140 New Recipes from New York's Acclaimed Restaurant by Danny Meyer
The Best Recipes in the World by Mark Bittman
Cooking by Hand by Paul Bertolli
Bouchon by Thomas Keller
Sauces: Classical and Contemporary Sauce Making by James Peterson
The New Making of a Cook: The Art, Techniques, And Science Of Good Cooking by Madeleine Kamman
The Universal Kitchen by Elisabeth Rozin
Hot Sour Salty Sweet: A Culinary Journey Through Southeast Asia by Jeffrey Alford
Staff Meals from Chanterelle by David Waltuck
The Silver Spoon by Phaidon Press
The French Laundry Cookbook by Thomas Keller
The Inn at Little Washington Cookbook: A Consuming Passion by Patrick O'Connell
The Olives Table: Over 160 Recipes from the Critically Acclaimed Restaurant and Home Kitchen of Todd English by Todd English
Sunday Suppers at Lucques: Seasonal Recipes from Market to Table by Suzanne Goin
Simply French: Patricia Wells Presents the Cuisine of Joel Robuchon by Patricia Wells
Norman Van Aken's Feast of Sunlight by Norman Van Aken
The Splendid Table: Recipes from Emilia-Romagna, the Heartland of Northern Italian Food by Lynne Rossetto Kasper
The Paris Cookbook by Patricia Wells
Lulu's Provencal Table: The Exuberant Food and Wine from the Domaine Tempier Vineyard by Richard Olney
Ducasse Flavors of France by Alain Ducasse
A New Way to Cook by Sally Schneider
Union Square Cafe Cookbook: 160 Favorite Recipes from New York's Acclaimed Restaurant by Danny Meyer
The bread baker's apprentice : mastering the art of extraordinary bread by Peter Reinhart
The Modern Art of Chinese Cooking: Techniques and Recipes by Barbara Tropp
Fewer