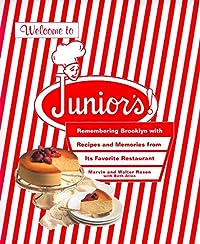 Welcome to Junior's! Remembering Brooklyn With Recipes and Memories from Its Favorite Restaurant

Welcome to Junior's! is a nostalgic tour of Brooklyn from the 1930s to the 1990s with reminiscences and recipes from the legendary restaurant renowned for its rich and creamy cheesecake. Junior's holds a special place in Brooklyn, also home of the Brooklyn Dodgers, Coney Island, and the Brooklyn Bridge. As well as a decade-by-decade history of the golden age of Brooklyn with wonderful photographs from the past fifty years, scattered throughout are memories and stories of how Junior's grew from its modest beginnings to its success today. From the very first day Junior's opened its doors in 1950 on the corner of DeKalb and Flatbush Avenue Extension in downtown Brooklyn, three generations of the Rosen family have worked hand in hand to build their restaurant into one of the most popular eateries in the borough today. First Harry Rosen, then his sons, Marvin and Walter, and now his grandsons, Kevin and Alan, have worked tirelessly to create and continue a famous Brooklyn neighborhood tradition -- a family restaurant that commands loyalty from its customers, and one to which they return day after day. Going to junior's is an event. It is a place that has become a home-away-from-home for Brooklynites over the years and is a popular destination for people from the entire New York metropolitan area. Today, just as on the day it opened, Junior's remains a quintessential Brooklyn phenomenon. It even looks remarkably like it did in the fifties -- bright orange booths that seat nearly four hundred, a glistening counter surrounded with diners, a busy soda fountain, and, of course, the bakery, brimming with all kinds of cheesecakes, homemade pies, towering layer cakes, and buttery pastries. Not only does Junior's stand for the best of ethnic, down-home fare but it also serves the best cheesecake in New York -- at the last count over four million slices each year. Welcome to Junior's! is not only a memory book to treasure but a cookbook with over one hundred favorite recipes. From Junior's signature cornbread, matzoh ball soup, crisp fried chicken, cheese blintzes, and baked stuffed shrimp to its legendary desserts -- Junior's famous #1 pure cream cheesecake, lemon meringue pie, strawberry shortcake, chocolate fudge layer cake, and ice-cream sundaes -- these recipes allow you to re-create a small slice of Junior's right in your own home kitchen.… (more)