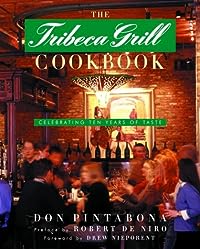 This year marks the tenth anniversary of Tribeca Grill, one of the best neighborhood restaurants in New York City. Acclaimed chef Don Pintabona shares his dazzling creations in this wonderful new book. The Tribeca Grill Cookbook celebrates this anniversary milestone with exciting food and flavors from around the world. To complete this collection, Tribeca Grill partners Robert De Niro and Drew Nieporent have provided a Preface and a Foreword, which are accompanied by a peppering of celebrity anecdotes throughout the book. Filled with more than 120 enticing recipes and dozens of full-color photographs, this cookbook is straightforward, with lots of new twists on old classics. Recipes include Lobster and Mango Tartlets, Crisp Fried Oysters with Asian Vegetable Slaw, Molasses-Cured Pork Loin with Boston Baked Beans, and Tribeca Film Center Peanut Butter Parfait. You'll also find suggestions throughout for the perfect wine for hors d'oeuvres, appetizers, salads, pastas, and entrées. The Tribeca Grill Cookbook is sure to be a neighborhood classic for your kitchen and the ultimate taste of Tribeca for your table.… (more)