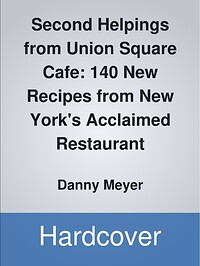 Ask New Yorkers to name their favorite restaurant and they are likely to reply: "Union Square Cafe." Indeed, Union Square Cafe has been ranked the city's most popular restaurant by the Zagat Survey for five consecutive years and has earned many of the food world's top honors, including a James Beard Award for Outstanding Restaurant of the Year, two three-star rankings from the New York Times, seven Awards of Excellence from Wine Spectator magazine, and the James Beard Foundation's Best Chef in New York Award for Michael Romano. What makes USC stand out in a sea of other great New York City restaurants? A simple but rare combination of extraordinary food, excellent wine, and the sort of warm, genuine hospitality one typically finds only in a neighborhood spot. In this new cookbook, proprietor Danny Meyer and executive chef and co-owner Michael Romano share the delicious dishes that have kept their customers coming back for more, year after year. Following the high standards for taste and accessibility set by their award-winning Union Square Cafe Cookbook, Second Helpings from Union Square Cafe offers more than 140 inspired recipes for everything from appetizers, soups, and salads to pastas, main courses, vegetables, side dishes, and desserts. These are the dishes that USC customers have come to know and love, including such favorites as a new version of their renowned Fried Calamari, Salt-Baked Chicken, Bollito di Vitello, Roasted Root Vegetables, and Blueberry-Lemon Meringue Pie. But, more than simply a recipe collection, Second Helpings is a valuable kitchen resource for anyone interested in elevating his or her cooking to a new level. Michael teaches home cooks how to make their own pasta, create the juiciest chicken imaginable, correctly clean morels, and add new depth of flavor to all kinds of dishes, while Danny offers lively commentary and wine accompaniments for nearly every recipe. With their able guidance, even the most inexperienced cooks can turn out spectacular food with ease and joy. Second Helpings captures the unique spirit of Union Square Cafe not just with recipes and animated text, but also with original black-and-white images by internationally acclaimed photographer Duane Michals. A longtime friend of USC, Duane has contributed his witty visual stories and restaurant vignettes in an innovative departure from standard food photography. On every level Second Helpings from Union Square Cafe is a cookbook you'll treasure using again and again. Like the restaurant, it will become a familiar favorite and a trusted source of great food.… (more)