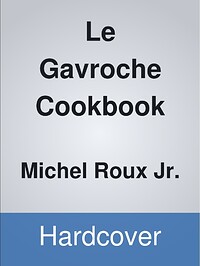 The creation of Albert and Michel Roux, Le Gavroche opened in 1967. At the time, it was the only restaurant of its kind in London, serving classical French food with the highest standards of cooking and service. As the River Café has set the standard by which Italian cooking is appreciated in Britain, so Le Gavroche represents the finest classical French cooking. Now run by Michel Roux Jr., it retains its two Michelin stars, and continues those high standards for which it has always been famous. Michel Roux Jr's style is 'modern French' - classical French cooking with a lighter and less rich approach, and subtly influenced by Mediterranean and Asian flavours and ingredients. This book is a slice of culinary history - a selection of the best of Le Gavroche's cooking over the last thirty years with 200 seasonal recipes carefully chosen for cooking at home.… (more)