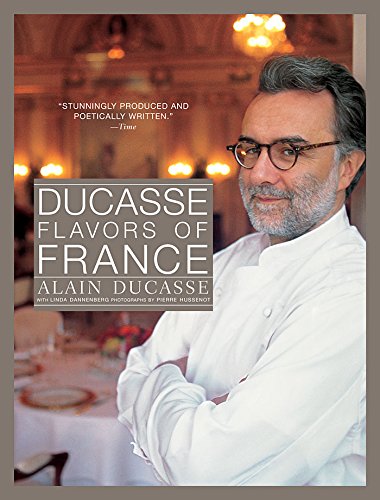 Brash, driven, and dazzlingly inventive, fourteen-star chef Alain Ducasse is a larger-than-life figure. At thirty-three, he was the youngest chef ever to be awarded three Michelin stars; and in 2005 he became the first chef in the world to win three stars for three restaurants, with a staggering total of fourteen stars spread across eight restaurants in three countries. He has mentored a generation of younger chefs who have introduced his cooking around the world and he has, quite simply, changed the face of traditional French cooking. In this, his first American cookbook, M. Ducasse shares the principles and techniques of his uniquely elemental cuisine. At its core are clarity of taste, precision in execution, and respect for the food itself, which to Ducasse means retaining its essential flavor. That respect for true taste results in a multitude of simple but striking techniques. Ducasse uses as much of each ingredient as he can--the skins, the shells, the baking juices, the pan drippings, the heads, the cooking broth, all the by-products of the process--in order to capture the truest taste. He incorporates different preparations of the same ingredient into a given dish, each revealing an individual aspect of its flavor--sliced raw artichokes, braised whole artichokes, and paper-thin slices of fried artichoke, for example, might be featured together. The brilliance of his food--apparent in recipes made with no more than two ingredients enhanced by a simple aromatic element, with seasoning reduced to a few grains of salt--explains why he is "the country's star chef" (Wine Spectator) and "the Escoffier of our time" (Le Point). Ducasse Flavors of France documents, in more than one hundred lavishly photographed recipes, the influences--Mediterranean, Provençal, and classical French--that permeate this extaordinary cuisine. Many of the recipes are simple, others complex, but all can be perfectly accomplished with a little time and patience.With its "alluringly simple dishes, like buttery fork-mashed potatoes, peppered slices of sauteed pumpkin, swordfish with citrus, exquisite chocolate tartlets, and a homey pear and honey cake made with big chunks of pear" (The New York Times), this is the most accessible Ducasse cookbook published. Yet there are still recipes to challenge ambitious cooks and great tips that will make all cooks better in the kitchen.… (more)