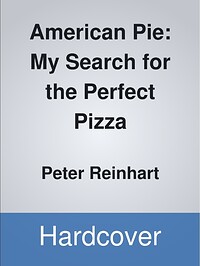 American Pie: My Search for the Perfect Pizza

On the subject of pizza, there is never a shortage of opinions. Allegiances run from the general (Chicago versus New York style, Neapolitan versus Roman) to the particular (Pepe's versus Sally's, Gino's East versus Pizzeria Uno), and new interpretations ever extend the pizza frontier.In AMERICAN PIE, master bread baker Peter Reinhart follows the trail from Italy to the States, capturing the stories behind the greatest artisanal pizzas of the Old World and the New. Beginning his journey in Genoa, Reinhart scours the countryside in search of the fabled focaccia col formaggio. He next heads to Rome to sample the famed seven-foot-long pizza al taglio, and then to Naples for the archetypal pizza napoletana. Back in America, the hunt resumes in the unlikely locale of Phoenix, Arizona, where Chris Bianco of Pizzeria Bianco has convinced many that his pie sets the new standard in the country. The pizza mecca of New Haven, grilled pizza in Providence, the deep-dish pies of Chicago, California-style pizza in San Francisco and Los Angeles--these are just a few of the tasty attractions on Reinhart's epic tour. Returning to the kitchen, Reinhart gives a master class on pizza-making techniques and provides more than 60 recipes for doughs, sauces and toppings, and the pizzas that bring them all together. His insatiable curiosity and gift for storytelling make AMERICAN PIE essential reading for those who aspire to make great pizza at home, as well as for anyone who enjoys the thrill of the hunt. A fascinating look into the great pizzas and pizzerias of Italy and America. Peter Reinhart's last book, THE BREAD BAKER'S APPRENTICE, was named Cookbook of the Year by both the James Beard Foundation and the International Association of Culinary Professionals.  Reviews"Peter Reinhart has taken a deep look into pizza, one of the best and simplest of foods, embracing all its variety. He probes American pizza especially, but he has tasted the original in Naples and visited elsewhere in Italy to learn about variations and relatives. He tells vivid stories, and his recipes and techniques are thorough and practical. A splendid book."--Edward Behr, editor, The Art of Eating"I doubt whether anyone else could be as passionate as Peter Reinhart about pizzas or have made such extensive and exciting journeys in pursuing them. He has collected great anecdotes and wonderfully detailed recipes in the course of his intercontinental hunt."--Alan Davidson, author of The Oxford Companion to Food"We all know that Peter Reinhart is a great baker and teacher, but now that he's fallen in love with pizza, we can see he's also a great tour guide as he takes us to the best pizzerias in Italy and America. Secrets are divulged, expert tips provided, and stories told. Much more than a collection of recipes, this is a book that is as fun to read as it is to bake from."--Carol Field, author of The Italian Baker… (more)