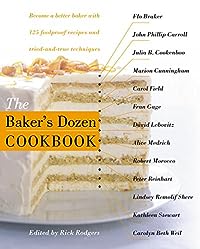 by The Baker's Dozen

More than ten years ago, cookbook author and teacher Marion Cunningham and professional baker Amy Pressman met occasionally to talk about the wonders and mysteries of baking. They chatted, exchanged ideas, offered suggestions, and ended up solving some of their difficult baking problems. Slowly a concept took shape. Suppose groups of like-minded bakers were to meet to exchange ideas and solve baking problems? At the first meeting of The Baker's Dozen, forty people showed up with forty lemon meringue pies. The topic of the meeting was weeping and shrinking meringues and how to prevent them from happening. (The solution: Heat the egg whites and sugar while beating to avoid weeping; use more egg whites to solve the problem of shrinking.) The word spread quickly, and The Baker's Dozen has grown to more than ten times the original number -- there are now more than four hundred members in the Bay Area. The groups continue to have two simple goals: Share what you know about baking and learn from one another. Now you can share the collective experiences and favorite recipes of The Baker's Dozen in The Baker's Dozen Cookbook, with recipes selected and tested by some of the most respected and most accomplished bakers in the business. Lindsey Shere, co-founder and pastry chef of Chez Panisse, shares the secrets of tarts. Authors Carol Field and Fran Gage and baker Peter Reinhart offer their collective wisdom on yeast breads and flatbreads. John Phillip Carroll teaches about easy quick breads, coffee cakes, and muffins. Renowned author and baker Flo Braker and her team share their years of cake-baking experience. Carolyn Weil and her group offer the ultimate advice and techniques for pies and piecrusts. Robert Morocco and Julia Cookenboo divulge their trade secrets of making foolproof cookies equal to those of any quality bakeshop. The Baker's Dozen Cookbook goes far beyond recipes. You'll benefit from what these bakers learned on their field trips. You'll learn tricks such as using dental floss to cut neat slices of creamy cheesecake. You'll learn the differences between a pastry bag and a parchment cone; between a p#65533;te bris#65533;e, a "broken dough," and a p#65533;te sabl#65533;e, a "sandy dough"; between butter and shortening in determining the flakiness of a crust; and so much more. So whether you simply want to become a better baker yourself or to form a Baker's Dozen group with others, all you need is The Baker's Dozen Cookbook. It puts four hundred of America's best bakers and everything they know right by your side. For baking tips, recipes, and information on starting your own Baker's Dozen, visit www.bakersdozen.org… (more)

The Simple Art of Perfect Baking by Flo Braker
In the Sweet Kitchen by Regan Daley
Nick Malgieri's Perfect Pastry by Nick Malgieri
Bittersweet: Recipes and Tales from a Life in Chocolate by Alice Medrich
Baking with Julia Savor the Joys of Baking with America's Best Bakers by Dorie Greenspan
33 more
Sweet Miniatures: The Art of Making Bite-Size Desserts by Flo Braker
Baking in America: Traditional and Contemporary Favorites from the Past 200 Years by Greg Patent
The All-American Dessert Book by Nancy Baggett
A Baker's Tour: Nick Malgieri's Favorite Baking Recipes from Around the World by Nick Malgieri
Classic Home Desserts: A Treasury of Heirloom and Contemporary Recipes from Around the World by Richard Sax
How to Bake: Complete Guide to Perfect Cakes, Cookies, Pies, Tarts, Breads, Pizzas, Muffins, by Nick Malgieri
Home Baking: The Artful Mix of Flour and Traditions from Around the World by Jeffrey Alford
Cookies Unlimited by Nick Malgieri
A Passion for Desserts by Emily Luchetti
The Secrets of Baking: Simple Techniques for Sophisticated Desserts by Sherry Yard
Baking by Flavor by Lisa Yockelson
Perfect Cakes by Nick Malgieri
Nancy Silverton's Pastries from the La Brea Bakery by Nancy Silverton
Maida Heatter's Book of Great Desserts by Maida Heatter
The Perfect Cake: 150 cakes for Every taste and Occasion by Susan G. Purdy
Baking: From My Home to Yours by Dorie Greenspan
Butter Sugar Flour Eggs: Whimsical Irresistible Desserts by Gale Gand
The Village Baker's Wife: The Deserts and Pastries That Made Gayle's Famous by Joe Ortiz
The Family Baker: 150 Never-Let-You-Down Basic Recipes by Susan G. Purdy
Great Coffee Cakes, Sticky Buns, Muffins & More: 200 Anytime Treats and Special Sweets for Morning to Midnight by Carole Walter
The All-American Cookie Book by Nancy Baggett
The Cake Bible by Rose Levy Beranbaum
Chocolate: From Simple Cookies to Extravagant Showstoppers by Nick Malgieri
The King Arthur Flour Cookie Companion: The Essential Cookie Cookbook (King Arthur Flour Cookbooks) by King Arthur Flour
The Pie and Pastry Bible by Rose Levy Beranbaum
Great Cookies: Secrets to Sensational Sweets by Carole Walter
Maida Heatter's Book of Great Chocolate Desserts by Maida Heatter
Maida Heatter's Book of Great Cookies by Maida Heatter
Once Upon a Tart...: Soups, Salads, Muffins, and More by Frank Mentesana
Rose's Heavenly Cakes by Rose Levy Beranbaum
Maida Heatter's Book of Great American Desserts by Maida Heatter
Dessert Circus: Extraordinary Desserts You Can Make At Home (Pbs Series) by Jacques Torres
The Good Cookie: Over 250 Delicious Recipes from Simple to Sublime by Tish Boyle
Fewer