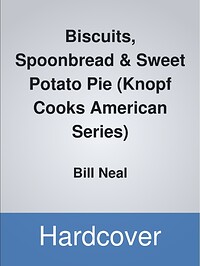 This delightful cookbook celebrates the glories of southern baking, with 300 recipes for the breads, biscuits, cakes, pies, cookies, and sweets that have been the pride of southern cooks for generations. From his first chapter on cornmeal--with recipes for dumplings, hushpuppies, and four styles of spoonbread--to his delicious array of desserts--including persimmon pudding, lemon chess pie, and pecan cake with caramel icing--Bill Neal interweaves fascinating bits of culinary history with a native's knowledge of the cooking secrets of the rural South. He demystifies beaten biscuits, revives such southern standbys as baps and bannocks, and freshens up old favorites such as peach cobbler and fruitcake. Passing on the traditions of the southern kitchen, Neal pays tribute to the richness of the region's heritage. Biscuits, Spoonbread, and Sweet Potato Pie was first published in 1990. (Not for sale in the British Commonwealth (except Canada), Ireland, or South Africa.)… (more)