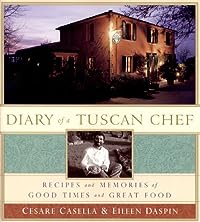 Diary of a Tuscan Chef

Cesare Casella's culinary career began at the age of thirteen in the kitchen of his family's restaurant, Il Vipore, just outside of Lucca in the hills of Tuscany.  In 1979 he took over the kitchen, and in 1993 Il Vipore was awarded its first Michelin star. Diary of a Tuscan Chefis not only a book of quintessential--and ambrosial--Tuscan dishes, it is the charming and wittily told story of Casella's journey from that first foray into Il Vipore's kitchen to becoming executive chef at Pino Luongo's famed Coco Pazzo restaurant in New York City. Arranged as a series of seasonal menus, each one inspired by a colorful anecdote taken from Casella's life,Diary of a Tuscan Chefis dedicated to the two most basic tenets of Tuscan cooking: seasonality and flexibility.  Creating the best, tastiest, most satisfying food from a few fresh, seasonally available ingredients is what Tuscan cooking is all about. Cesare Casella is a professional chef, but these are not "restaurant dishes." As he so aptly puts it, "As far as I know, no one has written a cookbook for the American public that presents Tuscan food as it is--good, simple, and natural.  The Tuscan table should be as easy to set in New York as it is in Garfagnana, or in Rome, Georgia, for that matter." All of the 150 recipes inDiary of a Tuscan Chefcan be made at home with ingredients found in any local supermarket.  In the end, it is Casella himself, a wonderful storyteller and a wonderful chef, who makes this book unique.  With his words and the many photographs of him, his food, and his family, the reader will be transported into a world of delicious cooking and delightful company.… (more)

Flavors of Puglia by Nancy Harmon Jenkins
La Terra Fortunata: The Splendid Food and Wine of Friuli Venezia-Giulia, Italy's Great Undiscovered Region by Fred Plotkin
Tuscan Cookbook by Stephanie Alexander
Simply Tuscan: Recipes for a Well-Lived Life by Pino Luongo
The Chianti Family Cookbook: Classic Recipes from the Heart of Tuscany by Giovanna Folonari Ruffino
27 more
Dolci Toscani: The Book Of Tuscan Desserts by Anne Bianchi
Flavors of Tuscany by Nancy Harmon Jenkins
Biba's Taste of Italy: Recipes from the Homes, Trattorie and Restaurants of Emilia-Romagna by Biba Caggiano
In Nonna's Kitchen: Recipes and Traditions from Italy's Grandmothers by Carol Field
Soffritto: Tradition and Innovation in Tuscan Cooking by Benedetta Vitali
Italian Farmhouse Cookbook by Susan Herrmann Loomis
The Food of Southern Italy by Carlo Middione
Tradewinds And Coconuts: A Reminiscence And Recipes From The Pacific Islands by Jennifer Brennan
Adventures of an Italian Food Lover: With Recipes from 254 of My Very Best Friends by Faith Heller Willinger
Simple French Cooking: Recipes from Our Mothers' Kitchens by Georges Blanc
La Mia Cucina Toscana: A Tuscan Cooks in America by Pino Luongo
True Tuscan: Flavors and Memories from the Countryside of Tuscany by Cesare Casella
Pigs and Pork: 90 Recipes from Italy's Most Celebrated Chefs (History, Folklore, Ancient Recipes History, Folklore, Ancien) by Fausto Cantarelli
Joachim Splichal's Patina Cookbook: Spuds, Truffles and Wild Gnocchi (Great Chefs--Great Restaurants) by Joachim Splichal
In a Roman Kitchen: Timeless Recipes from the Eternal City by Jo Bettoja
Extra Virgin: Recipes & Love from Our Tuscan Kitchen by Gabriele Corcos
Two Meatballs in the Italian Kitchen by Pino Luongo
Rome, At Home: The Spirit of La Cucina Romana in Your Own Kitchen by Suzanne Dunaway
Bugialli's Italy: Traditional Recipes From The Regions Of Italy by Giuliano Bugialli
Foods of Sicily and Sardinia and the Smaller Islands by Giuliano Bugialli
Umbria: Regional Recipes from the Heartland of Italy by Julia della Croce
Italian Festival Food: Recipes and Traditions from Italy's Regional Country Food Fairs by Anne Bianchi
Tuscany: The Beautiful Cookbook by Lorenza De'medici
A Fresh Taste of Italy: 250 Authentic Recipes, Undiscovered Dishes, and New Flavors for Every Day by Michele Scicolone
From the Earth to the Table: John Ash's Wine Country Cuisine by John Ash
Enoteca: Simple, Delicious Recipes in the Italian Wine Bar Tradition by Joyce Goldstein
Regional Foods of Southern Italy by Marlena de Blasi
Fewer