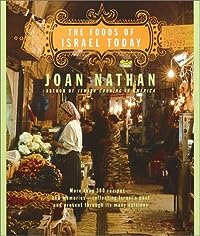 The Foods of Israel Today

"Joan Nathan has created a masterful blend of food and culture. She takes her reader on an extraordinary journey through the history of the land of Israel and the development of modern Israeli food. I was delighted to visit all the different ethnic communities that have contributed to Israeli cuisine, and my mouth watered just imagining the feast that Joan Nathan describes." --Teddy Kollek, former mayor of Jerusalem In this richly evocative book, Joan Nathan captures the spirit of Israel today by exploring its multifaceted cuisine. She delves into the histories of the people already settled in this nearly barren land, as well as those who immigrated and helped to quickly transform it into a country bursting with new produce. It is a dramatic and moving saga, interlarded with more than two hundred wonderful recipes that represent all the varied ethnic backgrounds. Every recipe has a story, and through these tales the story of Israel emerges. Nathan shows how a typical Israeli menu today might include Middle Eastern hummus, a European schnitzel (made with native-raised turkey) accompanied by a Turkish eggplant salad and a Persian rice dish, with, perhaps, Jaffa Orange Delight for dessert. On Friday nights she visits with home cooks who may be preparing a traditional Libyan, Moroccan, Italian, or German meal for their families, the Sabbath being the focal point of the week throughout Israel (all her recipes are accordingly kosher). And she takes us to markets overflowing with vegetables, fruits, herbs, and spices. To gather the recipes and the stories, Nathan has been traveling the length and breadth of Israel for many years--to a Syrian Alawite village on the northern border for a vegetarian kubbeh and to Bet She'an for potato burekas; to the Red Sea for farmed sea bream and to the Sea of Galilee for St. Peter's fish; to Jerusalem's Bukharan Quarter for Iraqi pita bread baked in a wood-fired clay oven, to the Nahlaot neighborhood for Yemenite fried pancake-like bread, and to a Druse village for paper-thin lavash; to a tiny restaurant in Haifa for Turkish coconut cake and to a wedding at Kibbutz May'ayan Baruch in the upper Galilee for Moroccan sweet couscous; and to many, many other places. All the while, she seeks out biblical connections between ancient herbs and vegetables and their modern counterparts, between Esau's mess of pottage and today's popular taboulleh, and she delights us with tales of all she encounters. Throughout, Joan Nathan shows us how food in this politically turbulent land can be a way of breaking down barriers between Jews, Moslems, and Christians. Generously illustrated with colorful photographs, this enormously engaging book is one to treasure, not only as a splendid cookbook but also as a unique record of life in Israel.… (more)

The Book of Jewish Food: An Odyssey from Samarkand to New York by Claudia Roden
Jerusalem: A Cookbook by Yotam Ottolenghi
The World Of Jewish Cooking: More Than 400 Delectable Recipes from Jewish Communities by Gil Marks
Olive Trees and Honey: A Treasury of Vegetarian Recipes from Jewish Communities Around the World by Gil Marks
Joan Nathan's Jewish Holiday Cookbook by Joan Nathan
28 more
Sephardic Flavors: Jewish Cooking of the Mediterranean by Joyce Goldstein
The New York Times Passover Cookbook : More Than 200 Holiday Recipes from Top Chefs and Writers by Linda Amster
Cucina Ebraica: Flavors of the Italian Jewish Kitchen by Joyce Goldstein
A Treasury of Jewish Holiday Baking by Marcy Goldman
The Brooklyn Cookbook (Knopf Cooks American Series) by Lyn Stallworth
Jewish Cooking in America: Expanded Edition (Knopf Cooks American) by Joan Nathan
The New York Times Jewish Cookbook: More than 825 Traditional & Contemporary Recipes from Around the World by Linda Amster
Quiches, Kugels, and Couscous: My Search for Jewish Cooking in France by Joan Nathan
Saffron Shores: Jewish Cooking of the Southern Mediterranean by Joyce Esersky Goldstein
The Book of New Israeli Food: A Culinary Journey by Janna Gur
A Drizzle of Honey : The Lives and Recipes of Spain's Secret Jews by David M. Gitlitz
A Fistful of Lentils by Jennifer F. Abadi
The World of Jewish Entertaining: Menus and Recipes for the Sabbath, Holidays, and Other Family Celebrations by Gil Marks
The Jewish holiday baker by Joan Nathan
Zahav: A World of Israeli Cooking by Michael Solomonov
In Memory's Kitchen: A Legacy from the Women of Terezin by Michael Berenbaum
2nd Avenue Deli Cookbook: Recipes and Memories from Abe Lebewohl's Legendary Kitchen by Sharon Lebewohl
Israeli Soul: Easy, Essential, Delicious by Michael Solomonov
Arthur Schwartz's Jewish Home Cooking: Yiddish Recipes Revisited by Arthur Schwartz
The World Of Jewish Desserts: More Than 400 Delectable Recipes from Jewish Communities by Gil Marks
The Gefilte Variations: 200 Inspired Re-creations of Classics from the Jewish Kitchen, with Menus, Stories, and Traditions for the Holidays and Year-Round by Jayne Cohen
The New American Cooking by Joan Nathan
Shabbat Shalom: Recipes and Menus for the Sabbath by Susan R. Friedland
The Scent of Orange Blossoms: Sephardic Cuisine from Morocco by Kitty Morse
1,000 Gluten-Free Recipes (1,000 Recipes) by Carol Fenster
1,000 Jewish Recipes by Faye Levy
A Blessing of Bread: The Many Rich Traditions of Jewish Bread Baking Around the World by Maggie Glezer
The Children's Jewish Holiday Kitchen: A Cookbook with 70 Fun Recipes for You and Your Kids, from the Author of Jewish Cooking in America by Joan Nathan
Fewer