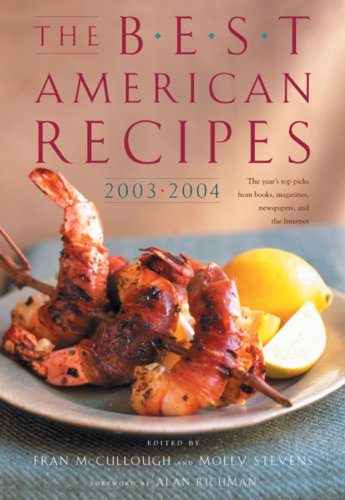 The Best American Recipes 2003-2004: The Year's Top Picks from Books, Magazines, Newspapers, and the Internet

Where can you turn to find the best recipes of the past year? According to reviewers for the New York Times, People, Food & Wine, House Beautiful, the Wall Street Journal, The Today Show,and many others, the answer is The Best American Recipes. Having this volume at your disposal is like subscribing to every food magazine in the country, owning every newly released cookbook, and having a trusted food authority to test every single recipe. For this year's volume, the most wide-ranging and exciting yet, series editors Fran McCullough and Molly Stevens tested their way through more than a thousand choices, including * magazines (from Gourmet to Real Simple to Newsweek) * cookbooks (from The Sopranos Cookbook to The Convent Cook) * newsletters (from restaurant publications to winery handouts) * Web sites (from About.com to the California Walnut Commission site) * food packages (from the back of a crcme fraîche package toa tag on a lemon squeezer) * and even insider e-mails from one food professional to another. What's new in this year's edition? In a word, simplicity. The Best American Recipes 2003-2004 gives you 147 fabulously easy recipes. There's a foolproof pasta from the world-famous French chef Alain Ducasse; a first-rate barbecue sauce from Lady Bird Johnson; a terrific breakfast from the cookbook that won this year's top award; bar cookies that caused a sensation at a New York cocktail party (made from Rice Krispies, no less); and the hands-down favorite cheesecake of The West Wing's Martin Sheen. In addition, you'll find all the answers to your holiday needs, from a foolproof juicy turkey that's the specialty of a New York restaurateur to desserts for the festive table. Also in The Best American Recipes are the top ten food trends of the year and a list of the ten best-of-the-best recipes published this year.… (more)

The Best American Recipes 2004-2005: The Year's Top Picks from Books, Magazines, Newspapers, and the Internet by Fran McCullough
The Best American Recipes 2002-2003 (Best American) by Fran McCullough
The Best American Recipes 2001-2002 by Fran McCullough
U.S.A. Cookbook by Sheila Lukins
As American As Apple Pie by Phillip Stephen Schulz
19 more
The Time-Life American regional cookbook by Time-Life Books
I'll Have What They're Having: Legendary Local Cuisine by Linda Stradley
CookSmart: Perfect Recipes for Every Day by Pam Anderson Executive Editor
The Tribeca Grill Cookbook: Celebrating Ten Years of Taste by Don Pintabona
The All-American Dessert Book by Nancy Baggett
Best of the Best from Hawaii: Selected Recipes from Hawaii's Favorite Cookbooks (Best of the Best State Cookbook) by Gwen McKee
American Classics: More Than 300 Exhaustively Tested Recipes For America's Favorite Dishes by Editors of Cook's Illustrated Magazine
The Perfect Recipe : Getting it Right Every Time : Making our Favorite Dishes the Absolute Best they can be by Pam Anderson Executive Editor
Perfect Recipes for Having People Over by Pam Anderson
Staff Meals from Chanterelle by David Waltuck
Adventures of an Italian Food Lover: With Recipes from 254 of My Very Best Friends by Faith Heller Willinger
The San Francisco Chronicle Cookbook by Michael Bauer
The Cook's Country Cookbook: Regional and Heirloom Favorites Tested and Reimagined for Today's Home Cooks by The Editors of Cook's Country Magazine
Pizza: Any Way You Slice It! by Michele Scicolone
Damn Good Food: 157 Recipes from Hell's Kitchen by Mitch Omer
The Best Bread Ever: Great Homemade Bread Using your Food Processor by Charles Van Over
Flavored Breads: Recipes from Mark Miller's Coyote Cafe by Mark Miller
The New American Cooking by Joan Nathan
The Best of Shaker Cooking: Over 900 Easy-to-Prepare Favorites from Nineteenth-Century Shaker Kitchens by Amy Bess Miller
Fewer