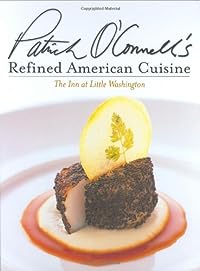 Patrick O'Connell is often referred to as the Pope of American Cuisine. He is one of the pioneers in our country's culinary evolution over the last quarter century. Selecting The Inn at Little Washington as one of the top ten restaurants in the world, Patricia Wells hails O'Connell as "a rare chef with a sense of near-perfect taste, like a musician with perfect pitch." As a self-taught chef who learned to cook by reading cookbooks, he has a unique ability to write recipes that are easy to follow and that produce delicious results. In this groundbreaking work, O'Connell celebrates the coming-of-age of American cooking and illustrates that we at last have our own equivalent to the haute cuisine of the great chefs of Europe. He manages to demonstrate that reproducing his versions of refined American cuisine is not only surprisingly doable but often easier than replicating the classic American dishes we grew up with. O'Connell offers vastly refined versions of his favorite American food: Macaroni and Cheese with Virginia Country Ham, Wild Mushroom Pizza, Crab Cake "Sandwich" with Fried Green Tomatoes, Pan-Roasted Maine Lobster with Rosemary Cream, Veal Medallions with Country Ham Ravioli, and Warm Plum Torte with Sweet Corn Ice Cream. All the recipes use readily available ingredients and are written in a clear, easy-to-follow voice - the voice of a self-taught chef who wants to share his love of food and hard-earned expertise. But even more refreshing than the delectable recipes are O'Connell's musings on his upbringing, American food, and entertaining. Reading this warm, witty book is the next best thing to dining at The Inn at Little Washington. Cooking from it is even better!… (more)

The Inn at Little Washington Cookbook: A Consuming Passion by Patrick O'Connell
Daniel Boulud's Cafe Boulud Cookbook: French-American Recipes for the Home Cook by Daniel Boulud
Frank Stitt's Southern Table: Recipes and Gracious Traditions from Highlands Bar and Grill by Frank Stitt
Ducasse Flavors of France by Alain Ducasse
Bouchon by Thomas Keller
25 more
Amuse-Bouche: Little Bites Of Delight Before the Meal Begins by Rick Tramonto
The Zuni Cafe Cookbook: A Compendium of Recipes and Cooking Lessons from San Francisco's Beloved Restaurant by Judy Rodgers
The American Country Inn and Bed & Breakfast Cookbook, Vol. 1: More Than 1,700 Crowd-Pleasing Recipes from 500 American Inns by Kitty Maynard
Sunday Suppers at Lucques: Seasonal Recipes from Market to Table by Suzanne Goin
Simple to Spectacular: How to Take One Basic Recipe to Four Levels of Sophistication by Jean-Georges Vongerichten
Chez Panisse Cooking by Paul Bertolli
Le Bernardin Cookbook: Four-Star Simplicity by Eric Ripert
Union Square Cafe Cookbook: 160 Favorite Recipes from New York's Acclaimed Restaurant by Danny Meyer
The Babbo Cookbook by Mario Batali
The Best American Recipes 2004-2005: The Year's Top Picks from Books, Magazines, Newspapers, and the Internet by Fran McCullough
Once Upon a Tart...: Soups, Salads, Muffins, and More by Frank Mentesana
The French Laundry Cookbook by Thomas Keller
Alfred Portale's Twelve Seasons Cookbook: A Month-by-Month Guide to the Best There is to Eat by Alfred Portale
Gourmet Meals in Minutes by The Culinary Institute of America
Second Helpings from Union Square Cafe: 140 New Recipes from New York's Acclaimed Restaurant by Danny Meyer
Happy in the Kitchen: The Craft of Cooking, the Art of Eating by Michel Richard
Aquavit: And the New Scandinavian Cuisine by Marcus Samuelsson
Winning Styles Cookbook by Elin Jeffords
Coyote Cafe: Foods from the Great Southwest, Recipes from Coyote Cafe by Mark Charles Miller
The All-American Dessert Book by Nancy Baggett
The Figs Table: More Than 100 Recipes for Pizzas, Pastas, Salads, and Desserts by Todd English
Glorious French Food: A Fresh Approach to the Classics by James Peterson
Charlie Trotter's Seafood by Charlie Trotter
Home Baking: The Artful Mix of Flour and Traditions from Around the World by Jeffrey Alford
Chez Panisse Pasta, Pizza, Calzone by Alice Waters
Fewer