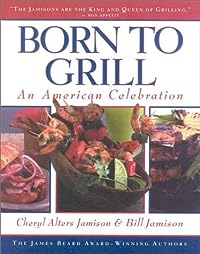 Born to Grill: An American Celebration

The Jamisons open up a roadmap that will guide the griller beyond steaks, burgers, and hot dogs, but they invite us, in chapters called 'Serious Steaks' and 'Hot Burgers and Haute Dogs' to delay our departure and explore the depths of those timeless favourites. A Pale Ale Porterhouse, a Basil and Sage T-Bone, a Devilish Horseradish Burger, a Crunchy Kraut Dog, and more make the decision fully worth our while. Is chicken the choice on your grill? Then why not ramble out west, for Hearty Ranch Chicken Halves, or try a Southern-style Cinnamon Chicken with Crunchy Cashew Relish? For fans of seafood, the Jamisons serve up oceans (and Lakes and streams) full of tasty fish and shellfish, from one coast's Boston Striper to the other's San Francisco Sole. Out on the horizon, this book uncovers alluring new terrain. Salads, pastas, and soups infused with the smoky taste of flame-kissed ingredients; splendid pizzas and tortilla dishes prepared on the grill; vegetables, juicy and crisp, in main dishes and sides; fruits and desserts for a finger-lickIn' finish -- all these and more make the griller's domain bigger and more delectable than it's ever been.… (more)