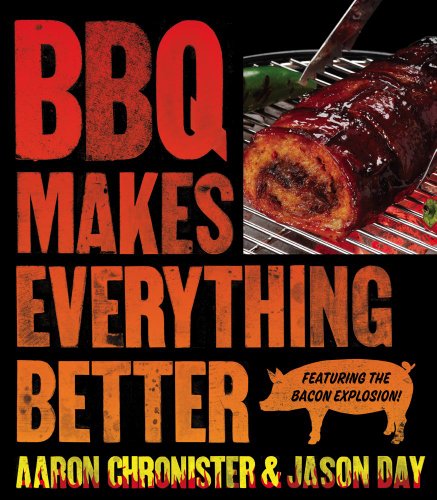 Now in paperback from the creators of The Bacon Explosion, priced for the target market—a collection of mouth-watering, easy-to-follow barbecue recipes for any occasion. Originally just two guys who loved to barbecue, Aaron Chronister and Jason Day are home cooks whose mastery of the grill has catapulted them from their backyards to international fame. The duo founded Burnt Finger BBQ—a competitive barbecue team that has garnered regional and national acclaim since its founding in 2008. But it was with the invention of the “Bacon Explosion” that one of Aaron and Jason’s culinary creations became a household name. A bacon-stuffed, bacon-wrapped smoked Italian sausage, it became an Internet sensation just months after Aaron and Jason launched their website, BBQAddicts.com. It instantly attracted attention from Fox News, Jay Leno, andGood Morning America(just to name a few), and theNew York Timesarticle about the Bacon Explosion was the second- most emailed story for the entirety of 2009. Aaron and Jason now have a cult following, but their skills at the grill are not limited to bacon alone. InBBQ Makes Everything Better, Aaron and Jason put all of their BBQ mojo into one cookbook that will revolutionize what can be done with meat, smoke, and fire. Including a thorough discussion of equipment, methods, and techniques for cooking well beyond the “Holy Trinity of BBQ” (ribs, pork, and brisket),BBQ Makes Everything Bettershows readers how to make a perfect meal even out of the “Ugly Stepchild of Barbecue”—chicken.  Lighthearted in tone and full of easy-to-follow instructions, this is the complete barbecue cookbook.… (more)