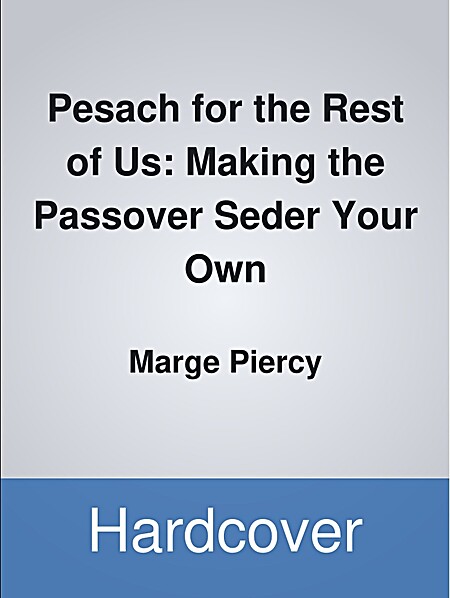 Pesach for the Rest of Us: Making the Passover Seder Your Own

Every year, poet and novelist Marge Piercy creates her own Passover seder with a group of family and friends. Babies have been born and grown up, friends have moved or divorced, but the principals continue to gather in her rustic Cape Cod home to participate in a seder that Piercy takes joy in tweaking each spring to make it more meaningful. In this journey through the ritual, Piercy coaxes us toward “a significant contemporary interpretation, rather than an emphasis on what is strictly ‘correct’ or traditional.” She reminisces about her grandmother, who thought herself unworthy to lead a seder because of her limited Hebrew but presided “morally” at the tab≤ she urges adding an orange to the seder plate; she even describes her heroic efforts to make her own gefilte fish (an experiment not to be repeated). Piercy offers her distinct slant on each element of the feast and provides dozens of her own wonderful recipes, which she delivers in the same warm, commanding voice as is heard in her poems and prose: “When I told Ira that I was going to explain how to cook matzoh brei, he thought I was crazy. Everybody knows how to make matzoh brei, he said. But I am of the opinion that there is no longer anything that everybody knows how to cook.” It is in that spirit–no question too simple–that Piercy welcomes readers to her kind of seder: a homemade and personal affair, the kind we all wish we could attend. This charming and instructive book of Passover wisdom, brimming with favorite dishes and Marge Piercy’s own moving Passover poems and blessings, invites us to look at an important Jewish ritual in a whole new way.… (more)