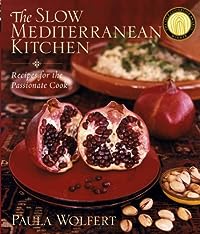 The Slow Mediterranean Kitchen: Recipes for the Passionate Cook

From one of the leading lights of contemporary gastronomy comes an irresistible collection of slow-cooked, flavor-drenched dishes from the cuisines of the Mediterranean Who can resist the sensuous delights of a slow-simmered stew, salmon fillet slow-roasted until it is soft as silk, or leg of lamb braised until it is meltingly tender? Slow cooking is the hottest new trend in food, and no one better captures the art of sumptuous, unhurried cooking than renowned food writer Paula Wolfert. In The Slow Mediterranean Kitchen, she returns to her favorite culinary regions and shares an enticing treasure trove of more than 150 authentic recipes that wend their wayfrom North Africa and the Eastern Mediterranean to Italy, Spain, and the South of France. With her trademark passion for detail and curiosity about cultural traditions and innovations, she offers loyal fans and new converts the secrets to simmering, slow roasting, braising, poaching, and marinating their way to flavor-drenched dishes that capture the enchanting tastes and aromas of the Mediterranean table. Perfect for anyone who loves to cook, this rich resource is a must-have for the bookshelfof everyone who is serious about food. Paula Wolfert (Sonoma, CA) is widely acknowledged to be the premier food writer in America. Her writing has received many awards, including the Julia Child Award, the M.F.K. Fisher Award, and the James Beard Award. She has a regular column in Food & Wine magazine, and her articles have appeared in such major publications as the New York Times, Saveur, Bon App'tit, and Cook's Illustrated. She is the author of six other cookbooks, including Couscous and Other Good Food from Morocco, Mediterranean Cooking, and The Cooking of South-West France.… (more)

The Cooking of the Eastern Mediterranean: 215 Healthy, Vibrant, and Inspired Recipes by Paula Wolfert
Paula Wolfert's world of food: A collection of recipes from her kitchen, travels, and friends by Paula Wolfert
Arabesque: A Taste of Morocco, Turkey, and Lebanon by Claudia Roden
Cooking by Hand by Paul Bertolli
The Splendid Table: Recipes from Emilia-Romagna, the Heartland of Northern Italian Food by Lynne Rossetto Kasper
21 more
The Italian Baker by Carol Field
The Zuni Cafe Cookbook: A Compendium of Recipes and Cooking Lessons from San Francisco's Beloved Restaurant by Judy Rodgers
Flatbreads & Flavors: A Baker's Atlas by Jeffrey Alford
A Mediterranean Feast: The Story of the Birth of the Celebrated Cuisines of the Mediterranean from the Merchants of Venice to the Barbary Corsairs, with More than 500 Recipes by Clifford A. Wright
Cucina of Le Marche: A Chef's Treasury of Recipes from Italy's Last Culinary Frontier by Fabio Trabocchi
Lulu's Provencal Table: The Exuberant Food and Wine from the Domaine Tempier Vineyard by Richard Olney
The New Book of Middle Eastern Food by Claudia Roden
Daniel Boulud's Cafe Boulud Cookbook: French-American Recipes for the Home Cook by Daniel Boulud
Cradle of Flavor: Home Cooking from the Spice Islands of Indonesia, Singapore, and Malaysia by James Oseland
Essentials of Classic Italian Cooking by Marcella Hazan
Hot Sour Salty Sweet: A Culinary Journey Through Southeast Asia by Jeffrey Alford
All About Braising: The Art of Uncomplicated Cooking by Molly Stevens
My Calabria: Rustic Family Cooking from Italy's Undiscovered South by Rosetta Costantino
Julie Taboulie's Lebanese Kitchen: Authentic Recipes for Fresh and Flavorful Mediterranean Home Cooking by Julie Ann Sageer
LA VERA CUCINA: Traditional Recipes from the Homes and Farms of Italy by Carlo Middione
Patricia Wells at Home in Provence: Recipes Inspired By Her Farmhouse In France by Patricia Wells
Mediterranean Vegetables: A Cook's ABC of Vegetables and Their Preparation by Clifford A. Wright
Sunday Suppers at Lucques: Seasonal Recipes from Market to Table by Suzanne Goin
In Nonna's Kitchen: Recipes and Traditions from Italy's Grandmothers by Carol Field
Home Baking: The Artful Mix of Flour and Traditions from Around the World by Jeffrey Alford
Into the Vietnamese Kitchen: Treasured Foodways, Modern Flavors by Andrea Nguyen
Fewer