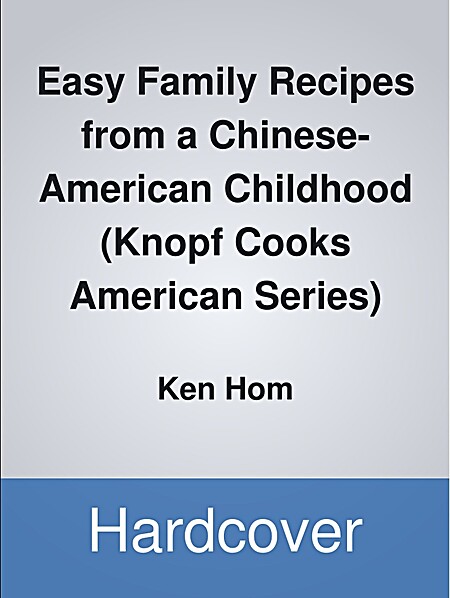 "Ken Hom, whose cookbooks and television shows on Chinese cooking have won him international acclaim, now gives us a Chinese cookbook unlike any other. It is a book that is deeply rooted in his past - he grew up in Chicago's Chinatown - and reflects the experiences of many other Chinese-Americans in the New World. And it is the first to give us recipes that represent the kind of good, simple cooking which is done in Chinese home kitchens all over America." "Here are the dishes that Ken Hom - and others like him - grew up on: the fresh, flavorful, easily cooked meals that his widowed mother, a working woman, would serve him day after day, as well as some dishes for special occasions." "Hom describes how, apprenticed at his uncle's restaurant as a youngster, he soon learned the difference between what Chinese patrons were served and the sweet glop that American customers expected. But many of these familiar dishes are delicious if properly prepared, and he often gives us both Chinese-American and authentic versions of favorites like Subgum Chicken Soup, Chop Suey, Classic Shrimp with Lobster Sauce (the most popular dish at his uncle's restaurant, it doesn't, of course, have any lobster in the sauce), Classic Moo Goo Gai Pan, and Egg Foo Young." "Tucked in among all these treasures are the warm personal memories that Ken Hom shares with other Chinese-Americans, such as his friend Amy Tan. For all of them food was the center of family life, and he recounts their stories, too, of shopping, of preparing all the good produce at the kitchen table, and of finally enjoying together the fruits of their labor."--BOOK JACKET.Title Summary field provided by Blackwell North America, Inc. All Rights Reserved… (more)

The Key to Chinese Cooking by Irene Kuo
In Nonna's Kitchen: Recipes and Traditions from Italy's Grandmothers by Carol Field
Ken Hom's Asian Ingredients by Ken Hom
Susanna Foo Chinese Cuisine: The Fabulous Flavors and Innovative Recipes of North America's Finest Chinese Cook by Susanna Foo
Rosa Mexicano by Josefina Howard
22 more
The Wisdom of the Chinese Kitchen: Classic Family Recipes for Celebration and Healing by Grace Young
The Modern Art of Chinese Cooking: Techniques and Recipes by Barbara Tropp
Savoring Spices and Herbs: Recipe Secrets of Flavor, Aroma, and Color by Julie Sahni
LA VERA CUCINA: Traditional Recipes from the Homes and Farms of Italy by Carlo Middione
The Catalan Country Kitchen HB: Food and Wine from the Pyrenees to the Mediterranean Seacoast of Barcelona by Torres
The Breads of France: And How to Bake Them in Your Own Kitchen (Culinary Classics & Curios) by Bernard Clayton
The Chinese Kitchen: Recipes, Techniques, Ingredients, History, and Memories from America's Leading Authority on Chinese Cooking by Eileen Yin-fei Lo
The Breath of a Wok: Unlocking the Spirit of Chinese Wok Cooking Through Recipes and Lore by Grace Young
Cucina Simpatica: Robust Trattoria Cooking From Al Forno by Johanne Killeen
Red, White, and Greens: The Italian Way with Vegetables by Faith Willinger
Taste of Mexico by Patricia Quintana
The Thousand Recipe Chinese Cookbook by Gloria Bley Miller
Classic Chinese Cuisine by Nina Simonds
Maida Heatter's Book of Great American Desserts by Maida Heatter
CUISINE OF THE WATER GODS by Patricia Quintana
Maida Heatter's Brand-New Book of Great Cookies by Maida Heatter
New York Cookbook: From Pelham Bay to Park Avenue, Firehouses to Four-Star Restaurants by Molly O'Neill
Mexican Regional Cooking by Diana Kennedy
Rosa's New Mexican Table: Friendly Recipes for Festive Meals by Roberto Santibanez
French Food, American Accent: Debra Ponzek's Spirited Cuisine by Debra Ponzek
Every Grain of Rice: A Taste of Our Chinese Childhood in America by Ellen Leong Blonder
The Supper Book by Marion Cunningham
Fewer