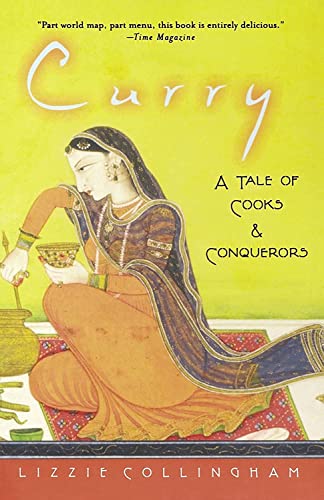 Curry: A Tale of Cooks and Conquerors

Curry serves up a delectable history of Indian cuisine, ranging from the imperial kitchen of the Mughal invader Babur to the smoky cookhouse of the British Raj. In this fascinating volume, the first authoritative history of Indian food, Lizzie Collingham reveals that almost every well-known Indian dish is the product of a long history of invasion and the fusion of different food traditions. We see how, with the arrival of Portuguese explorers and the Mughal horde, the cooking styles and ingredients of central Asia, Persia and Europe came to the subcontinent, where over the next four centuries they mixed with traditional Indian food to produce the popular cuisine that we know today. Portuguese spice merchants, for example, introduced vinegar marinades and the British contributed their passion for roast meat. When these new ingredients were mixed with native spices such as cardamom and black pepper, they gave birth to such popular dishes as biryani, jalfrezi, and vindaloo. In fact, vindaloo is an adaptation of the Portuguese dish carne de vinho e alhos--the name "vindaloo" a garbled pronunciation of vinho e alhos--and even "curry" comes from the Portuguese pronunciation of an Indian word. Finally, Collingham describes how Indian food has spread around the world, from the curry houses of London to the railway stands of Tokyo, where karee raisu (curry rice) is a favorite Japanese comfort food. We even visit Madras Mahal, the first Kosher Indian restaurant, in Manhattan. Richly spiced with colorful anecdotes and curious historical facts, and attractively designed with 34 illustrations, 5 maps, and numerous recipes, Curry is vivid, entertaining, and delicious--a feast for food lovers everywhere.… (more)

Curries & Bugles: A Memoir & Cookbook of the British Raj by Jennifer Brennan
From Curries to Kebabs: Recipes from the Indian Spice Trail by Madhur Jaffrey
Milk : the surprising story of milk through the ages : with 120 adventurous recipes that explore the riches of our first food by Anne Mendelson
50 Great Curries of India, Tenth Anniversary Edition by Camellia Panjabi
Vanilla: The Cultural History of the World's Favorite Flavor and Fragrance by Patricia Rain
14 more
The Indian Kitchen: A Book of Essential Ingredients With over 200 Easy and Authentic Recipes by Monisha Bharadwaj
The Wilder Shores of Gastronomy: Twenty Years of Food Writing by Alan Davidson
Food: The History of Taste (California Studies in Food and Culture) by Paul Freedman
The Potato: How the Humble Spud Rescued the Western World by Larry Zuckerman
The Indian Grocery Store Demystified (Take It with You Guides) by Linda Bladholm
The Oxford Companion to Food 2nd Ed by Alan Davidson
Arabesque: A Taste of Morocco, Turkey, and Lebanon by Claudia Roden
The True History of Chocolate (Second Edition) by Sophie D. Coe
The art of Indian vegetarian cooking : Lord Krishna's cuisine by Yamuna Devi
Cuisines of India: The Art and Tradition of Regional Indian Cooking by Smita Chandra
Encarnación's Kitchen: Mexican Recipes from Nineteenth-Century California, Selections from Encarnación Pinedo's El cocinero español (California Studies in Food and Culture) by Encarnación Pinedo
Consider the Fork: A History of How We Cook and Eat by Bee Wilson
The Oxford Companion to Italian Food by Gillian Riley
A Mediterranean Feast: The Story of the Birth of the Celebrated Cuisines of the Mediterranean from the Merchants of Venice to the Barbary Corsairs, with More than 500 Recipes by Clifford A. Wright
Fewer