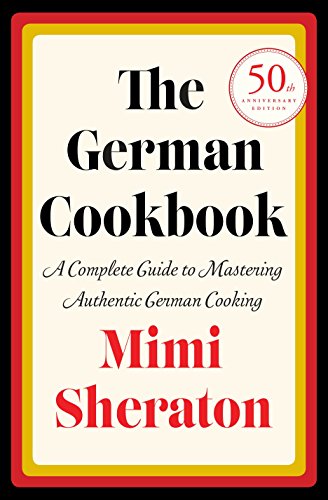 Here is the completely authentic book of German cuisine, from delicious soups to the greatest baking specialties of the world, complete with indexes and both English and German. In addition to the easy-to-follow recipes, the author discusses some of the great restaurants in Germany and how to order the traditional dishes. She researched these recipes for a year in the United States, eating almost every night in German restaurants, from the most expensive, to small neighborhood eateries, then traveled throughour Germany itself. Every recipe has been tested in her own kitchen--she guarantees that the ingredients are readily available and that the average person needs no special equipment in order to cook it. "Few countries in Europe," the author writes in her introduction, "have landscapes more beautiful or maore varied than those of Germany. It is not a large country, slightly smaller than the state of Montana, but within this area there is almost every kind of terrain one finds in the Temperate Zone. The German cuisine is almost as varied as the terrain. Just as Bavaria passes as the archetype for the entire country, so the food of that section--the dumplings, sausages, beer, pork, and cabbage dishes--represents German cooking to the outside world Delicious though these dishes may be, they hardly begin to give even a clue to the whole spectrum of German cooking, which has more appeal than the average American palate than that of any other foreign country. Think of all the German dishes that have been taken over by Americans--not only hamburgers and frankfurters, with or without sauerkraut, but the jelly doughnut that was first the Berliner Pfannkuchen, Boston Creme Pie, that in Germany is 'Moor's Head'; the range of Christmas cookies; and even that old stand-by of ladies' luncheons, creamed chicken in a patty shell, that appears in every German Konditorei as Koniginpastetchen." Here they all are, hundreds of them. So Prosit and gutessen- your health and good eating.… (more)