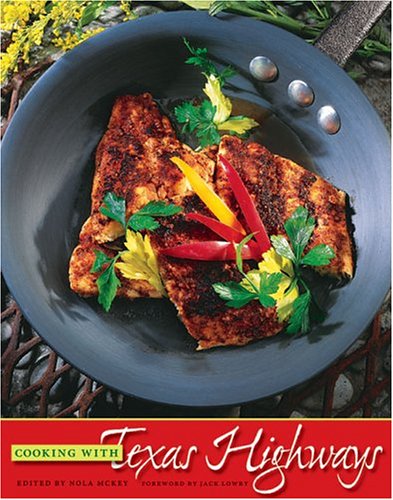 Whether you're hungry for down-home barbecue and Tex-Mex, or you want to try more exotic dishes such as Paella Valenciana and Thai Pesto, Texas Highways has long been a trusted source for delicious recipes that reflect wide-ranging Lone Star tastes. The state's official travel magazine published its first Texas Highways Cookbook, which has sold 20,000 copies, in 1986. Responding to the public's demand for a new collection of the magazine's recipes, the editors are pleased to bring you Cooking with Texas Highways, a compilation of more than 250 recipes that are as richly diverse and flavorful as Texas itself. Cooking with Texas Highways samples all the major ethnic cuisines of the state with recipes from home cooks, well-known chefs, and popular restaurants. It offers a varied and intriguing selection of snacks and beverages, breads, soups and salads, main dishes, vegetables and sides, sauces and spreads, desserts, and more. A special feature of this cookbook is a chapter on Dutch-oven cooking, which covers all the basics for cooking outdoors with live coals, including seventeen mouth-watering recipes. In addition, you'll find dozens of the lovely color photographs that have long made Texas Highways such a feast for the eyes, along with tips on cooking techniques and sources for ingredients and stories about some of the folks who created the recipes. If you want to sample all the tastes of Texas, there's no better place to start than Cooking with Texas Highways.… (more)

Cooking from the Heart of Spain: Food of La Mancha by Janet Mendel
The Food, Folklore, and Art of Lowcountry Cooking: A Celebration of the Foods, History, and Romance Handed Down from England, Africa, the Caribbean, France, Germany, and Scotland by Joseph Dabney
A World of Cake: From honey cakes to flat cakes, fritters to chiffons, meringues to mooncakes, tartes to tortes, fruit cakes to spice cakes, 150 recipes ... traditions from cultures around the world by Krystina Castella
Tom Fitzmorris's Hungry Town: A Culinary History of New Orleans, the City Where Food Is Almost Everything by Tom Fitzmorris
Texas Home Cooking by Cheryl Jamison
28 more
United Cakes of America: Recipes Celebrating Every State by Warren Brown
The Mom 100 Cookbook: 100 Recipes Every Mom Needs in Her Back Pocket by Katie Workman
Pig: King of the Southern Table by James Villas
The thirty minute pasta cookbook : 100 quick and easy recipes by Giuliano Hazan
The Berghoff Family Cookbook: From Our Table to Yours, Celebrating a Century of Entertaining by Carlyn Berghoff
River Road Recipes: The Textbook of Louisiana Cuisine by Junior League of Baton Rouge
Oaxaca al Gusto: An Infinite Gastronomy (The William and Bettye Nowlin Series in Art, History, and Culture of the Western Hemisphere) by Diana Kennedy
The Pastry Queen Christmas: Big-hearted Holiday Entertaining, Texas Style by Rebecca Rather
Dinner Solved!: 100 Ingenious Recipes That Make the Whole Family Happy, Including You! by Katie Workman
Biscuit Bliss: 101 Foolproof Recipes for Fresh and Fluffy Biscuits in Just Minutes by James Villas
The Tex-Mex Cookbook: A History in Recipes and Photos by Robb Walsh
The Best of Gourmet: 1993 Featuring the Flavors of Mexico by Gourmet Magazine Editors
The good egg : more than 200 fresh approaches from soup to dessert by Marie Simmons
Pastry Queen Parties: Entertaining Friends and Family, Texas Style by Rebecca Rather
What Mrs. Fisher Knows About So. Cooking (Cooking in America) by Abby Fisher
Baked Explorations: Classic American Desserts Reinvented by Matt Lewis
Pintxos: Small Plates in the Basque Tradition by Gerald Hirigoyen
Memories of Philippine Kitchens by Amy Besa
How to Cook Everything: Holiday Cooking by Mark Bittman
Best of the Best from Texas II: Selected Recipes from Texas' Favorite Cookbooks by Quail Ridge Press
Rancho de Chimayo Cookbook: The Traditional Cooking Of New Mexico by Cheryl Jamison
American Pie: My Search for the Perfect Pizza by Peter Reinhart
Pressure Cookers for Dummies by Tom Lacalamita
You Have It Made: Delicious, Healthy, Do-Ahead Meals by Ellie Krieger
American Classics: More Than 300 Exhaustively Tested Recipes For America's Favorite Dishes by Editors of Cook's Illustrated Magazine
Simple French Food by Richard Olney
Christmas Cookies: 50 Recipes to Treasure for the Holiday Season by Lisa Zwirn
Pure Dessert by Alice Medrich
Fewer