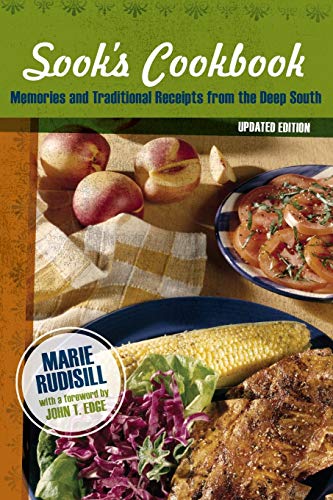 Sook's Cookbook: Memories and Traditional Receipts from the Deep South

Sook's Cookbook brims with delicious, uniquely southern recipes such as green olive jambalaya, watermelon rind preserves, and poinsettia cake, as well as classic buttermilk biscuits and lemon meringue pie. Marie Rudisill first began working on Sook's Cookbook with her nephew, Truman Capote, in the late 1940s to pay tribute to her charming, eccentric aunt, Sook Faulk. After putting the project aside for many years, Rudisill developed the book's methodology on her own: using nineteenth-century plantation daybooks for inspiration, she paired recipes with profiles of family and community cooks.In these pages, you'll meet Sook -- made famous in Capote's story, "A Christmas Memory" -- with her kitchen windowsill herb garden (complete with two pet chameleons to ward off bugs) and her penchant for cooking on her big, black woodstove year-round -- even on the hottest summer days. Recipes for tea sugar cookies and lemon-and-parsley butter tea sandwiches follow the profile of Marie's aunt Jenny, who ran the Faulk household, as well as her own renowned hat and accessory shop. Rudisill also spotlights often-overlooked cooks -- Little Bit, the official house cook, and Corrie Wolff, a housekeeper and occasional cook, whose recipes feature the Cajun and Creole flavors of Louisiana, as well as Sem, who prepared special food for parties, weddings, and funerals. In his foreword, Gourmet contributing editor John T. Edge calls Sook's Cookbook -- first published in 1989 -- "one of the most compelling regional cookbooks of the latter half of the twentieth century." He also celebrates Marie Rudisill's character and spirit -- from her sassy appearances on the Tonight Show, where she became known as the Fruitcake Lady, to her deep appreciation of the people and the old southern ways she knew and loved in Monroeville, Alabama. Much more than a cookbook, these pages pay homage to a small town in the Deep South and the intriguing people who made it come alive.… (more)