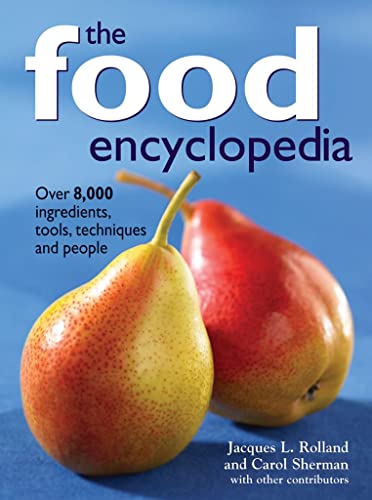 The Food Encyclopedia: Over 8,000 Ingredients, Tools, Techniques and People

The most comprehensive and authoritative food encyclopedia available. Cooking can be a wondrous adventure, especially with a thorough understanding of the history and origins of food, a grasp of the cultures and environments involved, and an appreciation for those who over the years have played key roles in its development. The Food Encyclopedia has 8,000 entries, with cross-reference on foods, wines, beverages, cooking methods and techniques, and biographies of prominent people. It is the most comprehensive food reference in the marketplace today, featuring 500 stunning illustrations and photographs alongside its extensive coverage. In the entry on arugula, for example, we read that it is an assertive salad green, eruca sativa, has a peppery taste somewhere between nasturtium and watercress, and is used frequently in Mediterranean dishes. The ancient Romans used both the leaves and the seeds of arugula. Thomas Jefferson, in detailed written instructions to his gardener at Monticello, listed arugula as essential for his kitchen garden. Included are more than 150 biographies of prominent individuals -- chefs, authors and inventors -- who have contributed to food and its lore. Chefs include Julia Child, Paul Bocuse, Alice Waters and Michael Stadtlander. Among the notable authors are Elizabeth David, M.F.K. Fisher and Irma S. Rombauer. The inventors include Carl Sontheimer the developer of the Cuisinart food processor. Becoming more familiar with words and terms, and finding out the background behind a food or an ingredient, ensures a well-prepared dish and adds to the pleasure of serving it. For any cook, this authoritative and fascinating book is an outstanding reference and cookbook companion.… (more)

The cook's essential kitchen dictionary : a complete culinary resource by Jacques L. Rolland
The Oxford Encyclopedia of Food and Drink in America: 2-Volume Set by Andrew F. Smith
Cupboard Love: A Dictionary Of Culinary Curiosities by Mark Morton
The Great Food Almanac: A Feast of Facts from A to Z by Irena Chalmers
The Food of the Western World: An Encyclopedia of Food from North America and Europe by Theodora Fitzgibbon
21 more
Vegetables from Amaranth to Zucchini: The Essential Reference: 500 Recipes, 275 Photographs by Elizabeth Schneider
The Gluttons Glossary: A Dictionary of Food and Drink Terms by John Ayto
Of Sugar and Snow: A History of Ice Cream Making (California Studies in Food and Culture) by Jeri Quinzio
COOK'S ENCYCLOPAEDIA: INGREDIENTS AND PROCESSES by Tom Stobart
The Oxford Companion to American Food and Drink (Oxford Companions) by Andrew F. Smith
The dictionary of American food and drink by John F. Mariani
The Chef's Companion, Third Edition by Elizabeth Riely
A Ligurian Kitchen: Recipes And Tales from the Italian Riviera by Laura Giannatempo
Food Lover's Companion, The (Barron's Cooking Guide) 3rd Edition by Sharon Tyler Herbst
Food Finds: America's Best Local Foods and the People Who Produce Them by Allison Engel
The Oxford Companion to Food 2nd Ed by Alan Davidson
A Year of Wine: Perfect Pairings, Great Buys, and What to Sip for Each Season by Tyler Colman
The New Food Lover's Companion by Sharon Tyler Herbst
Eating & Drinking: An A-Z of Great Food and Drink Combinations by Fiona Beckett
The Grilling Encyclopedia: An A - Z Compendium on How to Grill Almost Anything by A. Cort Sinnes
Webster's New World Dictionary of Culinary Arts by Steven Labensky
The Food of Asia by Kong Foong Ling
The Best Soups in the World by Clifford A. Wright
Radically Simple: Brilliant Flavors with Breathtaking Ease: 325 Inspiring Recipes from Award-Winning Chef Rozanne Gold by Rozanne Gold
Larousse Gastronomique by Larousse Gastronomique
The Produce Bible: Essential Ingredient Information and More Than 200 Recipes for Fruits, Vegetables, Herbs & Nuts by Leanne Kitchen
Fewer