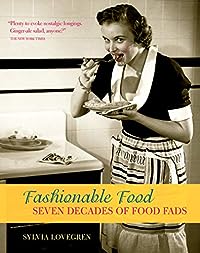 Though the Roaring Twenties call to mind images of flappers dancing the Charleston and gangsters dispensing moonshine in back rooms, Sylvia Lovegren here playfully reminds us what these characters ate for dinner: Banana and Popcorn Salad. Like fashions and fads, food--even bad food--has a history, and Lovegren's Fashionable Food is quite literally a cookbook of the American past. Well researched and delightfully illustrated, this collection of faddish recipes from the 1920s to the 1990s is a decade-by-decade tour of a hungry American century. From the Three P's Salad--that's peas, pickles, and peanuts--of the post-World War I era to the Fruit Cocktail and Spam Buffet Party loaf--all the rage in the ultra-modern 1950s, when cooking from a can epitomized culinary sophistication--Fashionable Food details the origins of these curious delicacies. In two chapters devoted to "exotic foods of the East," for example, Lovegren explores the long American love affair with Chinese food and the social status conferred upon anyone chic enough to eat pu-pu platters from Polynesia. Throughout, Lovegren supplements recipes--some mouth-watering, some appalling--from classic cookbooks and family magazines, with humorous anecdotes that chronicle how society and kitchen technology influenced the way we lived and how we ate. Equal parts American and culinary history, Fashionable Food examines our collective past from the kitchen counter. Even if it's been a while since you last had Tang Pie and your fondue set is collecting dust in the back of the cupboard, Fashionable Food will inspire, entertain, and inform.… (more)

Perfection Salad: Women and Cooking at the Turn of the Century, With a New Afterword (California Studies in Food and Culture) by Laura Shapiro
Square Meals : America's Favorite Comfort Cookbook by Jane Stern
Hometown Appetites: The Story of Clementine Paddleford, the Forgotten Food Writer Who Chronicled How America Ate by Kelly Alexander
Eating In America by Waverly Root
Fried Chicken: An American Story by John T. Edge
17 more
The American Century Cookbook: The Most Popular Recipes of the 20th Century by Jean Anderson
American gourmet : classic recipes, deluxe delights, flamboyant favorites, and swank "company" food from the '50s and '60s by Jane Stern
A Gracious Plenty by John T. Edge
Food: A Culinary History (European Perspectives) by Jean-Louis Flandrin
A Thousand Years Over a Hot Stove: A History of American Women Told through Food, Recipes, and Remembrances by Laura Schenone
Better Than Homemade by Carolyn Wyman
Finding Betty Crocker: The Secret Life of America's First Lady of Food by Susan Marks
We Are What We Eat: Ethnic Food and the Making of Americans by Donna R. Gabaccia
Serious Pig: An American Cook in Search of His Roots by John Thorne
The Cookbook Library: Four Centuries of the Cooks, Writers, and Recipes That Made the Modern Cookbook (California Studies in Food and Culture) by Anne Willan
Baking in America: Traditional and Contemporary Favorites from the Past 200 Years by Greg Patent
Chez Panisse Cooking by Paul Bertolli
Giving Thanks: Thanksgiving Recipes and History, from Pilgrims to Pumpkin Pie by Kathleen Curtin
American Home Cooking: Over 300 Spirited Recipes Celebrating Our Rich Tradition of Home Cooking by Bill Jamison
A Mediterranean Feast: The Story of the Birth of the Celebrated Cuisines of the Mediterranean from the Merchants of Venice to the Barbary Corsairs, with More than 500 Recipes by Clifford A. Wright
I Hear America Cooking by Betty Fussell
The Old World Kitchen: The Rich Tradition of European Peasant Cooking by Elisabeth Luard
Fewer