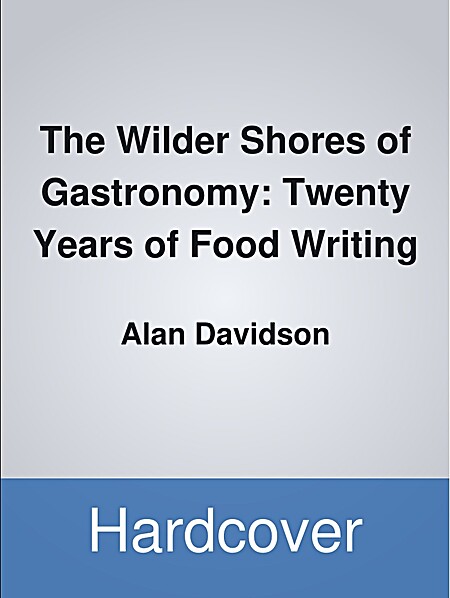 The Wilder Shores of Gastronomy: Twenty Years of Food Writing

In 1979, a remarkable culinary congress took place at Richard Olney's kitchen table in London, where he was entertaining Alan and Jane Davidson. Stumped by an edict from his publishers at Time-Life, Olney was looking for an outlet to print a few recipes for later inclusion in his "Good Cook" series. The idea of a journal took shape, and with the help of Elizabeth David, a remarkable venture began. Sixty-seven issues later, Petits Propos Culinaires is still directing its critical eye at the obscurer corners of the food world. In addition to the formidable trio of Davidson, Olney, and David, such esteemed food writers as Jane Grigson, Claudia Roden, and Charles Perry became regular contributors, ensuring a spirited, erudite discourse with each issue. THE WILDER SHORES OF GASTRONOMY is the first-ever anthology of writings from this seminal publication. Hand-selected by Mr. Davidson, the anthology reflects the remarkable breadth of the journal. The arcane ("An Experiment in Bronze Age Cooking") rubs shoulders with the practical ("Photographers' Cheesecake"), exotic ("Among the Yoruba Mushroom-Eaters"), and highly entertaining ("The Great Norwegian Porridge Feud"). The result is a highly eclectic collection of extraordinary food writing.- Spanning 20 years and including work by many of the world's most influential food writers, WILDER SHORES is a concise, thoroughly enjoyable introduction to food criticism, a "Norton anthology of gastronomica."Reviews" A] true example of food writing . . . world-class material. . . . the best writing about what should be everybody's favorite subject." --Saveur"An eclectic feast for food nerds." --Kansas City Star "An always serious, sometimes dense, and often quixotic collection that illustrates the great variety of ways you can talk about food" --Epicurious.com" A] true example of food writing . . . world-class material. . . . the best writing about what should be everybody's favorite subject." --Saveur… (more)

The Oxford Companion to Food 2nd Ed by Alan Davidson
Food: The History of Taste (California Studies in Food and Culture) by Paul Freedman
A Mediterranean Feast: The Story of the Birth of the Celebrated Cuisines of the Mediterranean from the Merchants of Venice to the Barbary Corsairs, with More than 500 Recipes by Clifford A. Wright
The Oxford Companion to Italian Food by Gillian Riley
The Oxford Companion to American Food and Drink (Oxford Companions) by Andrew F. Smith
5 more
Serious Pig: An American Cook in Search of His Roots by John Thorne
Simple French Food by Richard Olney
Lulu's Provencal Table: The Exuberant Food and Wine from the Domaine Tempier Vineyard by Richard Olney
The Way to Cook by Julia Child (Sep 28 1993) by Julia Child
Eating In America by Waverly Root
Fewer