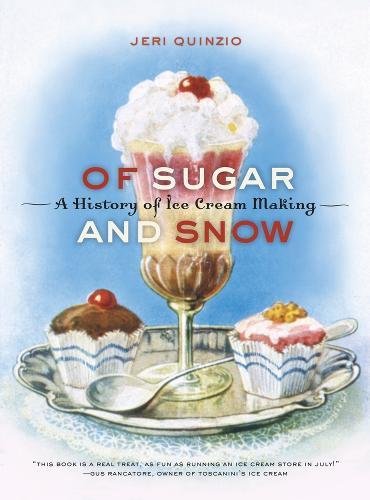 Of Sugar and Snow: A History of Ice Cream Making (California Studies in Food and Culture)

Was ice cream invented in Philadelphia? How about by the Emperor Nero, when he poured honey over snow? Did Marco Polo first taste it in China and bring recipes back? In this first book to tell ice cream's full story, Jeri Quinzio traces the beloved confection from its earliest appearances in sixteenth-century Europe to the small towns of America and debunks some colorful myths along the way. She explains how ice cream is made, describes its social role, and connects historical events to its business and consumption. A diverting yet serious work of history, Of Sugar and Snow provides a fascinating array of recipes, from a seventeenth-century Italian lemon sorbet to a twentieth-century American strawberry mallobet, and traces how this once elite status symbol became today's universally available and wildly popular treat.… (more)

Camembert: A National Myth by Pierre Boisard
Sherbet and Spice: The Complete Story of Turkish Sweets and Desserts by Mary Isin
Cuisine and Culture: A History of Food & People by Linda Civitello
Frozen Desserts: The Definitive Guide to Making Ice Creams, Ices, Sorbets, Gelati, and Other Frozen Delights by Caroline Liddell
Milk : the surprising story of milk through the ages : with 120 adventurous recipes that explore the riches of our first food by Anne Mendelson
8 more
Hog and Hominy: Soul Food from Africa to America (Arts and Traditions of the Table: Perspectives on Culinary History) by Frederick Douglass Opie
Food: The History of Taste (California Studies in Food and Culture) by Paul Freedman
The Cookbook Library: Four Centuries of the Cooks, Writers, and Recipes That Made the Modern Cookbook (California Studies in Food and Culture) by Anne Willan
Encarnación's Kitchen: Mexican Recipes from Nineteenth-Century California, Selections from Encarnación Pinedo's El cocinero español (California Studies in Food and Culture) by Encarnación Pinedo
The New Taste of Chocolate: A Cultural and Natural History of Cacao with Recipes by Maricel E. Presilla
A Passion for Ice Cream: 95 Recipes for Fabulous Desserts by Emily Luchetti
The Food Encyclopedia: Over 8,000 Ingredients, Tools, Techniques and People by Jacques L. Rolland
How to Make Ice Cream: An Illustrated Step-By-Step Guide to Perfect Ice Cream (Cook's Illustrated How to Cook) by Cook's Illustrated Magazine
Fewer